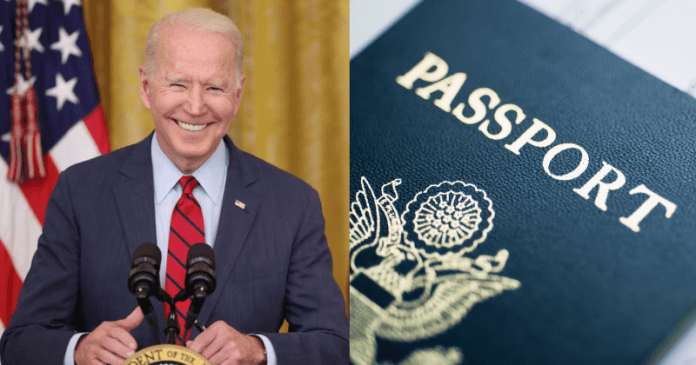 On the very last day of Pride Month, the Biden administration revealed that Americans will soon be able to choose the gender that appears on their passport, and the options will include a third gender option, apart from “M” and “F.” Since his days of campaigning, President Joe Biden promised to make gender inclusivity one of his priorities, and adding a third gender option on passports is the latest announcement. This also means that Americans will not need to provide medical documents to declare their self-identified gender on their US passports.

“Most immediately, we will be updating our procedures to allow applicants to self-select their gender as ‘M’ or ‘F’ and will no longer require medical certification if an applicant’s self-selected gender does not match the gender on their other citizenship or identity documents,” wrote the US secretary of state, Antony Blinken, in a press statement. “The Department has begun moving towards adding a gender marker for non-binary, intersex, and gender non-conforming persons applying for a passport or CRBA.”

Although there was no timeline given on when the move would be rolled out, Blinken added, “We are evaluating the best approach to achieve this goal. The process of adding a gender marker for non-binary, intersex, and gender non-conforming persons to these documents is technologically complex and will take time for extensive systems updates.”

After the announcement of the policy change, many welcomed the move and revealed how this could prevent people from being harassed or assaulted when the gender on their ID does not match their gender presentation.

Dana Zzyym, who has spent years advocating and fighting for additional gender markers on US passports, “It’s great news for all intersex and nonbinary people, because it basically says that we can get our passports. We don’t have to lie to get our passports. We can just be ourselves.” Talking about how this would help people, Zzyym added, “They can move forward in their lives. They don’t have to explain things to people. And they can say, ‘Hey, I do exist as intersex or as nonbinary.’ They shouldn’t have to explain.”

Also praising the move was Arli Christian, an ACLU campaign strategist who has been urging the administration to create a gender-neutral designation on federal identification.

“Improved access to accurate passports will have such a profound impact on the lives of trans, intersex, and nonbinary folks across the country,” said Christian. “Now people will be able to fill out a passport application and indicate M, F, or X—whichever is most appropriate for them. Trans, nonbinary, and intersex people know who we are, and we need recognition of who we are — not permission. But the work doesn’t stop here. We will keep working with the administration to make sure we see these important changes to gender change policies across all federal agencies.”