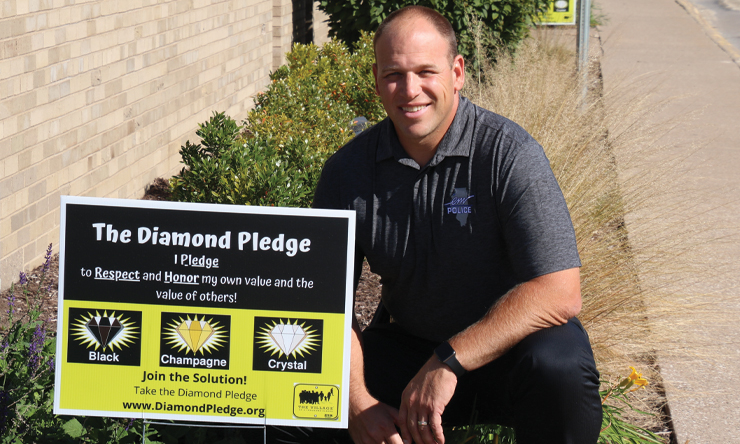 DAVENPORT, IOWA – During his earliest days on an East Moline Police Department beat, Jeff Ramsey ’00 leaned on lessons in community policing he learned in a St. Ambrose classroom.

Ramsey is leaning on those same lessons today as he guides the East Moline department into a new era of heightened racial awareness in his initial year as Chief of Police.

“The way to work forward from where we are now is to continue to try and build relationships,” Ramsey said of a national discussion on law enforcement and racial injustice that is taking place in the second half of 2020. “Really, it’s about dialogue and discussion. When there are issues, you need to talk about them. That’s the root of working through a problem. Hopefully, you come to a common understanding. If changes need to be made, then changes should be made.”

Ramsey grew up in an ethnically diverse neighborhood, attended diverse Davenport schools, and befriended scores of Black teammates during his career as a St. Ambrose football linebacker.

He would like to profess he is blind to race as he goes about his business of protecting and serving a racially mixed city of just more than 20,000.

But he knows better.

In conversations with Rev. P. Wonder Harris, pastor of the predominantly Black Mt. Zion Missionary Baptist Church in East Moline, Ramsey has examined the concept of implicit bias and found that he, like virtually everyone, has room for growth and need for change.

And so Ramsey has challenged assumptions about his own behavior and beliefs. “We all can do that,” he said.

Institutional bias exists in policing, in the justice system, in virtually every strand of American life.

It won’t go away in the course of one summer, noted Rev. Harris, who has worked with Ramsey and other East Moline leaders to recode language that feeds institutional racism. The initiative is called the Diamond Pledge.

“Language perpetuates bias,” Rev. Harris said, so the Pledge refers to citizens of various colors as black, champagne and crystal diamonds. In that way, he said, a sense of value, worth and humanity is assigned to every “diamond.” More importantly, he said, potential is inferred.

Harris said Ramsey has been an “excellent partner” in creating the pledge. “He certainly understands how bias plays a role in decisions and he honestly wants to fix that,” the pastor said. “I’m grateful for our relationship.”

Ramsey is grateful for the opportunity to lead a department, and to call on skills he gained in the classroom and on the football field at St. Ambrose, he said.

“I’m ready for it, even though it’s been a tough first year,” he said. “It’s a tough time to be a police officer, but if we keep doing the right things, it will get better.”