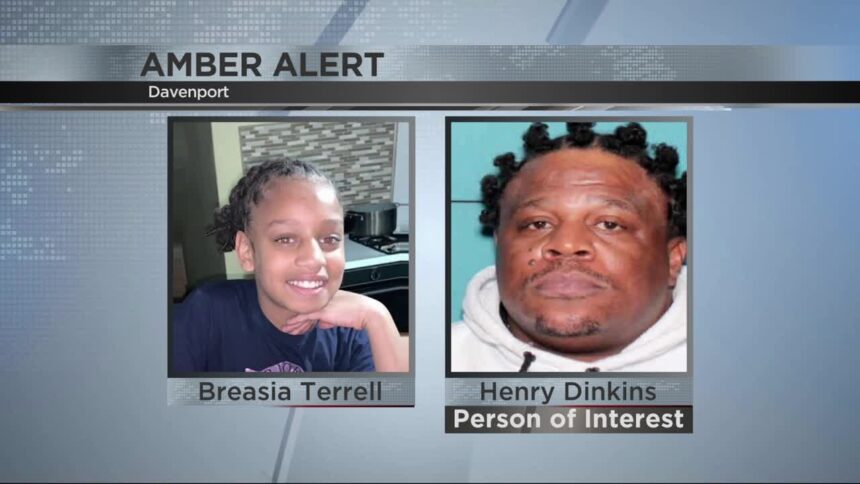 DAVENPORT, IOWA – The Davenport Police Department issued a press release Thursday reminding the public of the investigation into the disappearance of Breasia Terrell.

“We want the community to know this case remains a priority for our investigators and we continue to aggressively investigate Breasia’s disappearance,” Davenport Police Assistant Chief Jeff Bladel said in the release. “All leads we have received have been thoroughly investigated.”

In the release the department said three Davenport police investigators and one supervisor are assigned to the case, along with a pair of agents from the Federal Bureau of Investigation. The release said those investigators have followed-up on 170 tips, conducted hundreds of interviews and served “over 60” search warrants related to Breasia’s disappearance.

FBI Omaha Special Agent in Charge Eugene Kowel says investigators believe “there are people in the community who can still provide information that will assist in finding Breasia.”

The FBI is offering a $10,000 reward for information that leads to finding Breasia or the arrest of anyone involved in her disappearance. Additional rewards are being offered by Crime Stoppers of the Quad-Cities.

Despite the tips and rewards, only one person has been named a “person of interest” in the case. Henry Earl Dinkins was arrested July 10 and later charged with three unrelated counts of violating the sex-offender registry.

Breasia was spending the night with her brother at Dinkins’ home during the time period she disappeared. The 48-year-old Dinkins has not been charged with any crime related to the girl’s disappearance.

“Our investigators remain in contact with Breasia’s mother, Aishia Lankford,” Bladel said in the release. “We cannot imagine the grief she and her family are experiencing.”