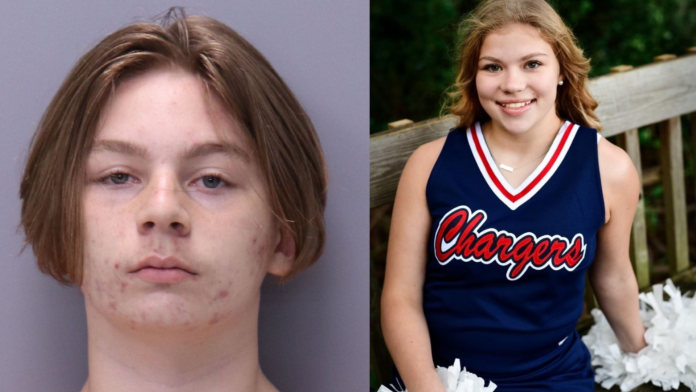 A13-year-old cheerleader went missing on Sunday in Florida and was found dead the next day. The teen was last seen shortly after midnight on Sunday in her Durbin Crossing neighborhood. On Monday around 6 pm, her body was discovered in a remote and wooded area by a local resident who alerted the cops immediately. She was fully clothed when her body was found, reports officials.

On the day Tristyn’s body was found, Sheriff Robert Hardwick held a press conference where he announced that a 14-year-old minor has been arrested in connection to the teen’s death. The suspect—whose name was withheld at the time, due to his age— attended Patriot Oaks Academy alongside the victim, but their relationship is unclear. He is currently being held on one count of second-degree murder by the Department of Juvenile Justice, Hardwick said. Later on, his identity was revealed as 14-year-old Aiden Fucci.

“That’s actually a decision we made collectively … with the State Attorney’s Office,” Hardwick said at the time. “We can always increase the charge.” At the time, the cause of her death wasn’t revealed but later it was determined that she died of “force trauma by stabbing” and her cause of death was ruled by the medical examiner as a homicide, the St. Johns County Sheriff’s Office announced on Tuesday. Hardwick described Tristyn’s death as a “cold-blooded murder.”

“That being said, I don’t wanna mention the number of times [Tristyn was stabbed], but it is horrific. It is horrible,” Hardwick said. “And the word accident is nowhere involved in this case.” It was then revealed that she was allegedly stabbed 114 times before her death while fighting off her killer. 7th Judicial Circuit State Attorney R.J. Larizza said during a news conference also revealed the suspect’s charges have been upped from second-degree murder to first-degree, and will be charged as an adult.

“It brings me no pleasure to be charging a 14-year-old as an adult with first-degree murder,” Larizza said. “But I can tell you also the executive team and I reviewed all the facts, all the circumstances, the applicable law and it was not a difficult decision to make, that he should be charged as an adult.”

Out of the 114 stab wounds Bailey sustained, at least 49 were to her hands, arms and head. “They were defensive in nature,” he said, adding that “premeditation could be inferred certainly from just the sheer number of stab wounds that Tristyn Bailey had to suffer.”

“Every time that arm went back, and every time that arm went down, that was premeditation,” Larizza said. “To say that it was horrific could arguably be made as an understatement,” he said, adding that the 14-year-old suspect who was in the juvenile home will be transferred to an adult prison, though he will be held separately from the adult inmates. “It’s a sad decision and a sad state of affairs,” Larizza said. Unfortunately, a motive for the murder is yet to be determined.