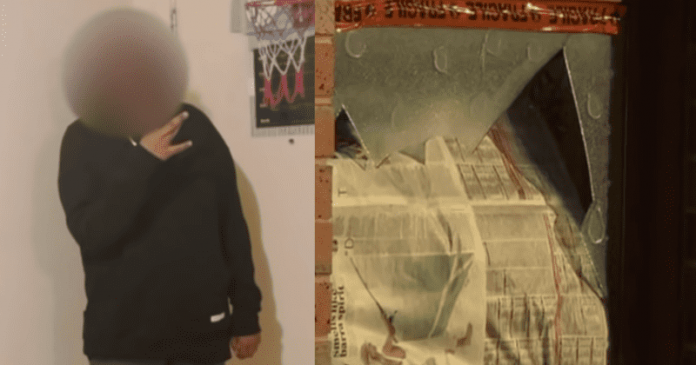 An elderly woman is now living in fear after a teenager broke into her house and forced himself upon her in the middle of the night. The 91-year-old pensioner was fast asleep in her home when the 16-year-old boy smashed his way inside the house on Thursday, July 1. When the boy found the sleeping woman, he got into bed with her and reportedly tried to rape her just before midnight. The startled woman woke up to find the boy lying on top of her and began shouting.

Her screams prompted the boy to run out and flee from the scene. Leaving a trail of blood behind, the boy escaped through a broken window while the woman was left absolutely shaken.

By the time officers arrived at the woman’s house, the boy was long gone.

Following the incident, the terrified elderly woman is now living with the fear of being attacked again. She has been staying with her family members since the sickening break-in took place.

Members of the quiet community are also in disbelief and were shocked to find out that something of this nature happened to an elderly woman, who was living not far away from their own homes.

“You don’t expect in a quiet community for someone who is elderly to have to go through that. It’s appalling,” one local said. “…At 91, that’s going to be one of your remaining memories for life, so I hope something gets done about it.”

“I don’t know what to say,” another resident said. “It’s disgusting to see something like that happen.”

Soon after breaking into the woman’s house, the teenager was arrested on Saturday afternoon by detectives from the Special Crime Investigation Section in Adelaide. The following Monday, he appeared before a Youth Court whilst facing charges of aggravated serious criminal trespass and assault with intent to rape.

The boy’s identity remains undisclosed, and he hoped the court would allow him to be released to live in a small country town with his family. However, the magistrate turned the bid down and cited the seriousness of the charges against him.

After the court session, friends and relatives of the teenage boy refused to speak to the media and hurriedly left.

The heinous attack that the boy committed is not the first one he has carried out. The teenager has a history of offenses related to trespassing, according to court documents. He is scheduled to appear in court in another two weeks and will remain in custody till then.