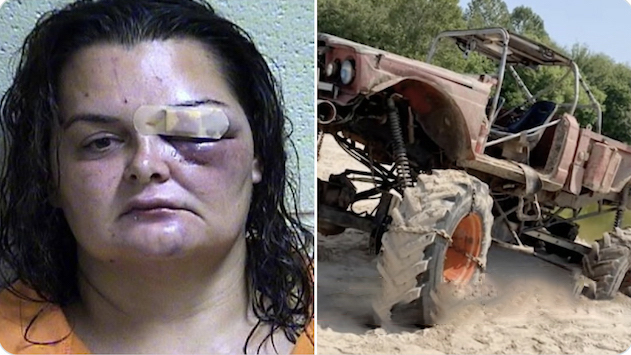 A family all-terrain vehicle riding in Oklahoma ended in tragedy when a fight between husband and wife escalated into murder. According to the police officials, an argument over food escalated to the point that her husband, Christopher, said that he wanted a divorce, at which point his wife, Chanelle,  said she was going to run him over.

“There was some alcohol involved,” police said.

Christopher’s adult son, Christopher Cornett, and his teenage daughter were present during the incident. They ran after their stepmother when she tried to drive off after the incident. She then tried to run them down as well, but Cornett jumped into the ATV to try to remove its keys, punching his stepmother in the face.

His teenage daughter reported to park employees that her father had died, at which point they called 911.

Chanelle reportedly told police that her husband had assaulted her before she ran him down. Back in 2020, she had filed for two orders of protection against her husband in Cleveland County, but a judge had dismissed both requests. Authorities have witnesses that confirmed that her acts were intentional.

Chantelle Lewis remains in police custody with her bond reportedly set at $30,000.