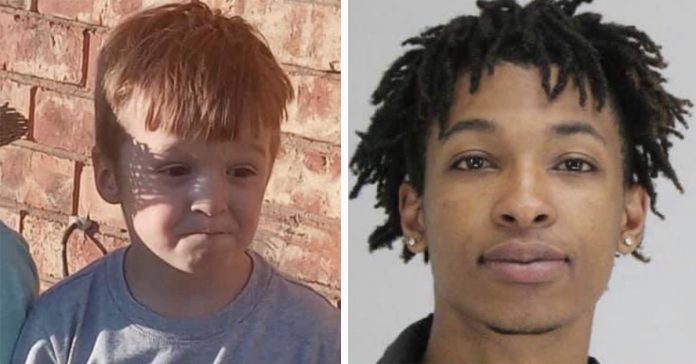 A surveillance camera in the bedroom of a 4-year-old boy might help determine his killer. Young Gernon’s body was discovered on Saturday morning on the street near his home in Dallas, Texas. An 18-year-old man has been charged with burglary and kidnapping, but is also suspected of killing the 4-year-old. He may yet be charged with capital murder if certain forensic evidence matches.

On Monday, flowers and teddy bears were left by mourners on the spot where Cash’s body was found.

Cameron Mori said Cash was like his little brother, and described him as: “The sweetest little boy. He loved everybody, the biggest smile ever. He loved to play super heroes with us and all that.”

Reports state that Cameron’s mother, Monica Sherrod, had been taking care of Cash since his father left him a few months ago. When she woke up on Saturday morning, she realized the 4-year-old was missing.

“I got up, I’m talking about in my shorts, no socks, no shoes, no shirt and I run down over there,” Mori said.

Dallas police, meanwhile, arrested Darriynn Brown on Sunday. Authorities say a baby video monitoring system shows the 18-year-old lifting Cash from his bed after having broken into the house.

The arrest affidavit reads: “At about five a.m….was removed from his crib as he was sleeping……viewed the video and identified the suspect…”

He continued: “There’s no reason for this. What he did was wrong and I don’t know what made him think that this is alright and this is okay. This is a four-year-old kid bruh, like for what?”

Cash had a twin brother who was also staying in the home with Cameron and his mom. He was unharmed, and temporarily removed from the home by protective and regulatory services along with Mori’s two young biological brothers.