Despite fewer doses coming to Iowa, vaccinations remain on track 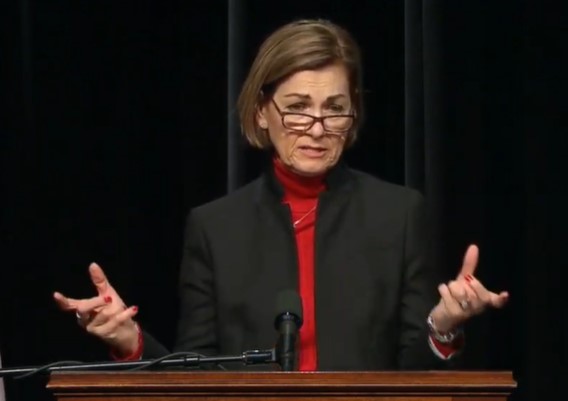 Despite an unexpected 20% reduction in the amount of COVID-19 vaccine that Iowa expected to receive this week, Iowa is on track to begin vaccinating residents and workers in nursing homes next week as originally planned, Gov. Kim Reynolds said Tuesday.

Speaking at a press conference, Reynolds acknowledged that while Iowa is among two dozen states that are receiving less of the Pfizer and Moderna vaccines than originally anticipated, 8,400 Iowa health care workers have already been vaccinated.

She said the federal government has waived the requirement that states have on hand at least 50% of the vaccine needed to vaccinate nursing home residents and workers before launching that effort. Because of that change, Iowa can still begin vaccinating those individuals on Dec. 28.

On Dec. 16, the Iowa Department of Public Health said federal officials had notified the agency that Iowa would receive significantly fewer COVID-19 vaccine doses than planned.

Reynolds noted that over the weekend Gen. Gustave Perna, head of the federal vaccine program called Operation Warp Speed, had taken responsibility for the error in estimating states’ vaccine allocations and had apologized.

“Deploying Iowa’s vaccine strategy has been, and it will continue to be, a monumental effort,” Reynolds said. “This is true not only at the state and local level, but at the national level, as well.”

State officials around the country had complained last week that they were able to access only a portion of the vaccine originally promised. California, for example, is now receiving 40% less vaccine than was expected. Those expectations were based on estimates made in mid-November, and didn’t factor in last-minute requirements imposed by the FDA.

Reynolds said residents of Iowa’s long-term care facilities will begin receiving their vaccinations next week with assistance from Walgreen’s, CVS Pharmacies and other business partners.