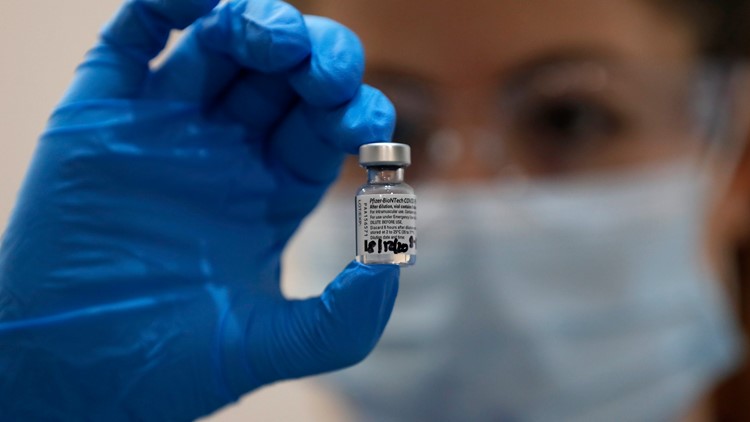 DAVENPORT, Iowa – Genesis Health System has administered the first batch of the Pfizer COVID-19 vaccine to its frontline workers.

This marks the first coronavirus vaccination given in the Quad Cities. A doctor and a registered nurse were the first to receive it Tuesday morning at Genesis Convenient Care in Davenport.

“This gives us new hope as we administer the vaccine because it’s the vaccine that’s gonna help us reach herd immunity,” said Doug Cropper, the CEO of Genesis Health System.

For 10 months and counting, health care workers have dealt with the tragic impacts of the coronavirus. For some, a vaccine represents a new day in the fight against the virus.

“Today feels like a breath of fresh air that we’re turning the corner and saying yes we’re still going to have people who are getting COVID and it’s still going to be a devastating disease that we’re going to have to continue to manage, but now we’re starting to protect. We’re starting to prevent and that’s what we want to do. We want to keep people well,” said Dr. Kurt Andersen, the Senior Vice President of Physician Operations and Chief Medical Officer.

For others, it’s a big relief.

“It’s been such a long, dark year, that’s it’s nice to actually have some light at the end of the tunnel and to have some hope for a better year to come,” said Dr. Robert Mixsell, the Medical Director at Genesis Community Care. “I think it’s important to be an example and to show our fellow coworkers that this is safe, effective, and it’s an important thing for the community.”

Officials said this is just the first step and everyone has to continue taking precautions, but it’s a new beginning.

“We’re going to get there. The light at the end of the tunnel is there, but this is the time to really double down on our efforts to prevent the virus spread while we build that immunity in our community,” Andersen said.

They will be giving out doses in phases based on the vaccine supply and priority within their health system. They set the priority with the leadership of the infection control team and are going to focus on the employees who have the highest risk of exposure.

“What it’s actually doing is it makes a protein that looks like the protein that’s on the virus we’re trying to fight and your body makes antibodies against that protein. It’s actually pretty genius. Programming your own cells to fight disease,” said Dr. Michael Persson, a family practice physician with Genesis. “Ideally, we’re going to see some level of herd immunity within the Quad Cities, thinking of it locally. To the point where we’re seeing infection rates drop. Get those high-risk patients protected so that we can get them back to some sense of normalcy. So you could go see your grandmother in the nursing home whose been locked up for however many months. I think that would be the thing that I would like to see.”

Dr. Brian Witt works in Pulmonary and Critical Care. He’s a part of the team of health care workers that manage the ventilators and intubate COVID patients. With a vaccine here, he said while rough times lay ahead, the day represented hope.

“Stay vigilant and keep wearing the masks. Just because the vaccine’s here doesn’t mean that we can go maskless. We gotta stay strong during this time,” he said, “there’s a lot of hope but still remain vigilant.”

Genesis said it has received 1,000 doses of the vaccine for its Iowa hospitals and 500 doses for its Illinois hospitals in the Quad Cities region.

Another COVID-19 vaccination site for employees is located at Genesis Medical Center in Silvis.