“I want my daddy!” cries 6-year-old girl rescued from kidnapper’s car, she was yanked off her bike and abducted 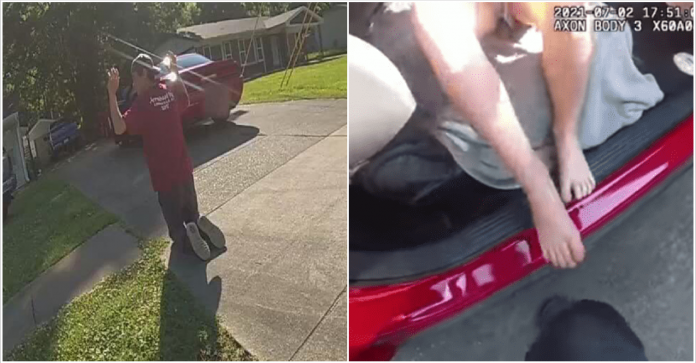 A heart-wrenching moment was captured on video after a 6-year-old girl was found terrified in the front seat of her kidnapper’s car. Right before being abducted, the little girl was riding her bike outside her home on July 2. At around 5:40 pm, a 40-year-old man drove through and saw the girl on her bike, riding down the street. Witnesses in the area saw the man yanking the child off her bicycle and putting her inside his red sedan.

“I was looking down the road, (and) a car came around the corner from the stop sign, parked in the middle of the street,” one witness, Prentiss Weatherford. “He got out… (There was) a little girl in front of her car on her bicycle. He just grabbed her by the collar, threw her bike, threw her in the passenger’s seat, made his way on down the road.”

Prentiss and his father acted quickly and followed Robby’s car. They also managed to note down the last three digits of his license plate before the kidnapper fled away. The neighbors also called the police and passed on all the details they had about the abductor. Soon, the search for the little girl began, and police officers found the red-colored vehicle not far from where the girl was snatched away. Body camera footage captured officer Jason Burba approaching the car that had the child, sitting in the front seat.

“When I approached the vehicle I didn’t know what was going to be behind that door, the tint was so dark,” Burba said. As he opened the door, the officer was heard saying, “It’s OK. Come here, it’s OK.” The terrified little girl immediately fell into the officer’s arms and cried, “I want my daddy.”

Officer Burba and sergeant, Joseff Keeling, were first to arrive at the scene and were overwhelmed when they safely found the girl. “It was tough,” Burba said. “You have kids.” Since the moment they heard about the missing child, the officers immediately sprung into action and found the child about 10 minutes later. “It’s like the world stops,” Burba said. “Like every second feels like hours.”

Keeling added, “It was overwhelming. Especially when you hear her crying and asking for her family because she’s so scared. It was definitely a gut check.” The body camera footage released also shows the officers asking Robby to get out of the car. The kidnapper was seen complying with the officers’ orders.

It was reported that the kidnapper had no relation with the girl. While speaking to the police, Robby said he saw the child “playing outside near the street, circled the block, and then took her from the side of the road.” As the girl was crying in the front seat of his car, Robby tried to “console her before deciding he knew what he was doing was wrong,” according to information released by the police department. The citation also stated that Robby claimed to have felt bad about what he did and that he knew it was wrong.

After being charged with kidnapping a minor and booked into the Louisville Metro Corrections, Robby pleaded not guilty and is being held on a $1 million bail. The little girl is safely back with her family after the rescue.