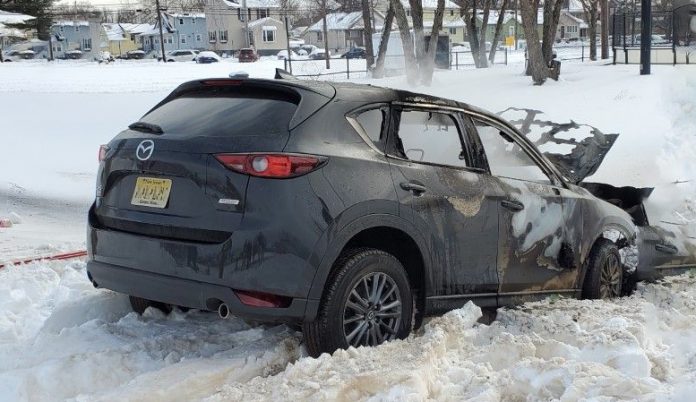 Sometimes, the things that may seem right to us at one point can do us more harm than good, to be honest. A man, whose car got stuck in the snow in New Jersey tried everything he could to get his vehicle out of the snowbank. The unidentified man had reportedly been revving his vehicle’s engine after getting stuck in the pile of snow about 10 miles outside of New York City in Little Ferry, New Jersey. All he wanted to do was get his car out of the snow and be on his way. But it sparked an accident that led to his tragic death.

Police in Little Ferry said officers responded to a report of a car getting stuck in a pile of snow after going down an embankment near Losen Slote Creek Park.

Little Ferry police Capt. Ronald Klein said that two police officers found the 62-year-old driver repeatedly revving his car -a Mazda SUV- and rocking it back and forth so it would dislodge from the snow it was stuck in.

He revealed that the officers told him to stay calm and stop doing whatever he was doing. They also informed him that they would go call for help – a tow truck, so they could pull the car out. The cops were on their way back to the car when they heard a popping sound and saw the SUV go up in flames.

They immediately rushed to the car to try and get the man out of the vehicle, Klein continued, but the doors were locked which made it harder for them to pry it open. However, the cops did not give up and after multiple attempts to break into the SUV, one officer managed to break open the rear passenger window.

But it was too late by then, as the entire car was engulfed in flames. Though the driver’s identity hasn’t been released, his family has been notified of the unfortunate death, added Klein. The investigation for this case will be overseen by the Little Ferry Police Department and the Bergen County Prosecutor’s Office.

“The vehicle can get stuck deeper if you apply too much gas, so lightly touch it, gently shifting from forward to reverse with the wheel straight. Do this several times. Be patient as this may take a few attempts. Once there is some momentum, you might add more sand, salt, or kitty litter in the path of the wheels.”

Now you know what to do if you ever find yourself in a similar situation. It’s always better to be safe than sorry!