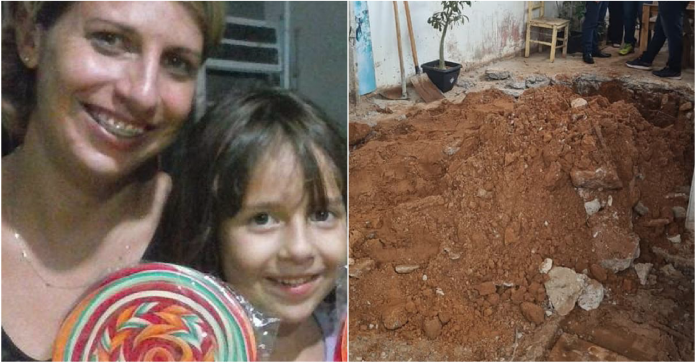 Nobody had seen 34-year-old Cristiane Arena and her 9-year-old daughter, Karoline Vitória in 3 months. Those who knew the family only found out what happened to the mother and daughter after the police uncovered their bodies from the concrete patio of the recently renovated house belonging to Cristiane’s partner, Fabrício Buim Arena Belinato. Investigators were led to find the bodies of the mother and daughter after Cristiane’s teenage daughter was questioned on the mother’s whereabouts.

Initially, the 16-year-old claimed that her mom had run away with another man and had taken her younger daughter with her. But she was later able to point investigators to the very spot where Karoline was buried, leading the police to investigate the teenage daughter’s involvement in the crime as well.

The police first wound up on the property when they were informed that the teenage girl might be in danger as she was staying alone in the house with Fabrício. They also suspect that Fabrício was romantically involved with the underage girl and may even be abusing her.

The police were told by neighbors that Fabrício was controlling and wouldn’t let the teenager step out of their house in Pompeia, Brazil. Investigators also found suspicious transactions being made from Cristiane’s bank account during the months of December and January, which they believe were done by Fabrício himself.

Upon arriving at the house, they found only the man and teenager there and felt like things were amiss in the teenager’s story. In addition to this, they also found something was wrong with the groundwork of the property. “The girl said that her mother left with her youngest daughter after meeting a new boyfriend, but the statements were contradictory and we went to investigate,” police chief Filho said.

Later, the daughter told the police that her mother and sister were forced to dig up their own graves, and she later showed them the spot where her little sister, Karoline was buried. It was near a plastic pool in the yard, and it was right next to her mother.

On February 2, 2021, the Brazilian police smashed Fabrício’s concrete patio and found the bodies of the mother and daughter, almost three months after they were murdered. An autopsy of the bodies of Cristiane and Karoline revealed that the mother was stabbed with a knife while the daughter was hit on the head before they were buried.

Police are trying to find out the teenager’s role in the crime. While an inappropriate sexual relationship between the teen and her deceased mother’s partner is suspect, nothing can be said for sure as the girl could also have been a victim of abuse. While the cops were able to locate the bodies but have been unable to find Fabrício, who is believed to have fled Pompeia.

Fabrício was also questioned right after the bodies were found. However, he was reportedly released on bail, for which the police faced severe criticism as he was reported as the prime suspect in the gruesome murder case. The latest they know about Fabrício’s whereabouts is that his car was spotted two hours away from Pompeia. The police are still carrying out their investigation into the deaths of the young mother and her 9-year-old daughter.