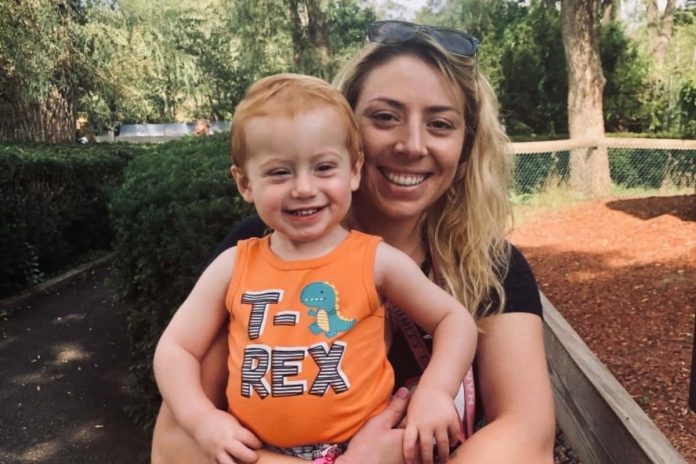 About three months after the bodies of a mother and her 2-year-old son were found inside their New Hampshire condo, officials have now confirmed that they both died in a tragic murder-suicide. Reports indicate that the mother had locked her child up in a closet before committing suicide by shooting herself. Before she took her own life, Mercedes had put her son inside a bedroom closet and made sure he had no way of pushing his way out by stacking up furniture against the closet’s door. Mercedes then reportedly put a gun to her head and pulled the trigger, causing her own death while her son died of “compressional asphyxia due to being pinned between the closet door and door frame, as well as a contributory cause of death of malnutrition.”

Young Mason had suffocated to death because of the furniture that his mother placed against the closet so he wouldn’t be able come outside and find her body.

“Bedroom furniture had been placed against the outside of the closet door, preventing Mason from fully opening the door,” the police revealed.

When investigators arrived at the Tall Pines Condominium complex in Manchester on December 14, they found the mother’s body in bed with a single gunshot wound, but what was tragic is that young “Mason’s body was found pinned in the partially open door, between the closet door and doorframe,” according to the police’s statement.

“Based upon the information available at this time, it appears that Ms. Tremblay caused the death of Mason,” the Attorney General’s Office said.

It was also reported that the toddler was autistic and the mother had been reported to state officials in the past for the way she treated him. There were also instances where Mercedes was abusive towards her own mother, Rhonda Wilkens-Hickey, as well.

Rhonda’s boyfriend, Pierre Brendan revealed that Mercedes had a variety of mental and emotional issues and was going through a tough time in May, 2020. Around that time, there was one incident where Mercedes allegedly hit Pierre multiple times and punched Rhonda in the face, but the two did not press charges.

Pierre also revealed that he felt Mercedes was verbally abusive to young Mason. A police report also previously noted Pierre saying the boy “cries and does not want to go with her when she picks him up.” Pierre further revealed that he had seen Mercedes aggressively pulling the child by the arm and yelling at him before.

In one police report, it was said that Rhonda “realizes some of the struggles” that Mercedes is facing and “at the end of the day, is still her daughter and wants to help her in any way possible.” However, on December 14, both Mercedes and Mason were found dead and loved ones wrote on a GoFundMe page set up for funeral expenses, “The love Mercedes and Mason shared will always be a cherished memory. Our heart is heavy, missing them everyday. Strength lies in the difficulties we have to overcome, but there’s comfort knowing we’re not alone.”