Mother, whose baby was born prematurely at just 23 weeks and spent the first 5 months in the hospital, says cuddles saved the child’s life after doctors suggested that ‘skin-to-skin’ hugs may help the newborn survive 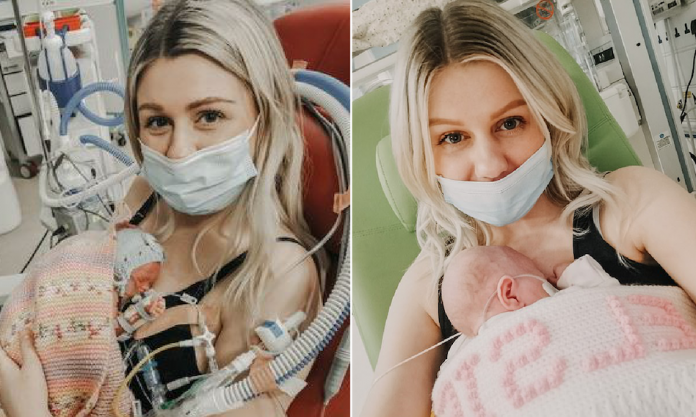 The 33-year-old mom, whose baby was born prematurely at just 23 weeks and spent her first 5 months in the hospital fighting for life, says cuddles saved her daughter’s life after doctors suggested that skin-to-skin hugs care may help the baby survive. The 6-month-old girl, who reportedly spent spent her first five months in the hospital battling for life, is finally home with her family.

According to the 33-year-old mother, Amy Dutton, her newborn daughter, Elsie, was born at just 23 weeks weighing 1lb 4oz, the Mirror reports. Unfortunately, Elsie’s twin died in the womb. The unfortunate mom was able to hold her baby for just 30 seconds before she was taken to an incubator. When Elsie was just 10 days old, the doctors performed a surgery to fix a hole in her bowel. The child spent 30 days in the incubator before doctors told the mother to hug her baby for 3-4 hours every day.

During an interview with The Sun, the 33-year-old mother reportedly said: “The first time I held Elsie properly was amazing, I’ve never known anything like it. There’s no other feeling in the world that compares. I’d hold her and I could see on all the monitors her heart rate was relaxing. It’s crazy to think that me cuddling her was having such an impact, it saved her life.

It was good for me too, ­because being able to hold her also helped bring down my stress levels. Losing Dotty (Elsie’s twin) was really difficult, because it was before 24 weeks I was never able to register her as a stillborn, she was classed as a miscarriage. That meant I wasn’t able to put on Elsie’s birth certificate that she was a twin either.”

According to The Sun, the 33-year-old mom was originally pregnant with twins but suffered twin to twin transfusion syndrome, where one baby receives all the nutrients.. In Dec. 2021, the young woman went into early labour when ­doctors tried to ­separate her twins. The doctors initially thought that the endoscopic laser ablation had gone well. But, unfortunately, the pregnant woman then started bleeding heavily and ­needed three blood transfusions.

On Dec. 2, 2021, Elsie was born. The doctors told Amy and her 34-year-old husband Scott that she may not survive. Last month, the medical personnel told the family that the baby is strong enough to go home.

The 33-year-old mom from U.K. also told The Sun: “Bringing her home for the first time was honestly amazing. I almost didn’t think it was real, the day felt like a dream come true. I’ve never felt such a relief as when we got to walk out of the hospital and take Elsie home. It’s so surreal to hold your baby and think about how you could have lost her. Having her home after all that uncertainty was just bliss.

She’s defied all the odds, she’s just amazing. Just before we left, our doctor told me Elsie was the first baby she intubated that had survived. To think she’s overcome that and come away with no issues, we’re so incredibly lucky.”

The clinical director of children’s services, Dr. Francis, told The Mirror that ‘kangaroo care’ had makes a huge difference for premature babies like Elsie. “When babies like Elsie are born prematurely, clinical intervention is key but parent’s involvement also has a hugely positive effect. When mothers hold their babies in their arms for a long time, as they do with kangaroo care, stress for both mother and baby is reduced and we see improved short- and long-term outcomes.” Dr. Francis reportedly said.