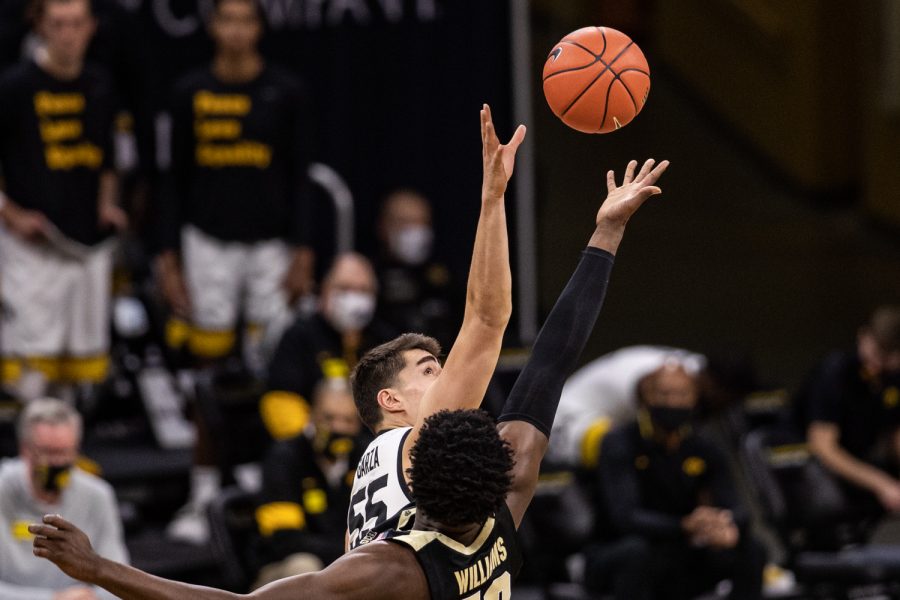 Iowa – After suffering a loss to the No. 1 Gonzaga Bulldogs at the Sanford Pentagon in Sioux Falls, South Dakota, on Saturday, the Iowa men’s basketball team rebounded with a 70-55 win over Purdue to open up Big Ten Conference play Tuesday night.

Despite missing out on an opportunity to defeat the No. 1 team in the AP Poll on a national stage, the Hawkeyes showed no signs of hangover after the big game.

“We’re a veteran team,” reigning Big Ten Player of the Year Luka Garza said. “We know what it’s like to take a loss and have a short stretch into the next game. We knew we had to flush it, learn from it, and take those things into the game, and kind of take it out on the next team. I think we did that tonight at a really high level. Our ability to defend and get rebounds was one of the best performances we’ve had. I’m just really proud of our guys and the way we rebounded tonight.”

Against Gonzaga, the Hawkeyes were outrebounded 37 to 49, and outshot by nearly 30 percent from the 3-point line. Postgame, Garza had said that his team needed to increase its effort on the glass and in pursuit of fifty-fifty balls to ensure its success is maintained throughout the season.

“A lot of times, even in the Gonzaga game, we’d get a good stop,” Garza said. “We’d force a missed shot, but if you don’t get the rebound, it doesn’t really count for anything.”

Garza and his teammates responded positively to the loss to the Bulldogs, attacking the glass and the Boilermakers on both ends of the floor.

The Hawkeyes outrebounded the Boilermakers 37 to 35 and held Purdue to only 55 points on the night.

“Our approach has always been to play the game, analyze the game, be honest with each other, make some adjustments, make some improvements, and that’s not just collectively, that’s individually,” head coach Fran McCaffery said. “We had some guys have some serious defensive breakdowns [Saturday] that shouldn’t have had them. We point it out to [our players]. We don’t belittle them. We don’t scream and yell. We show it to them so we can see it. We drill it. Then, we put the gameplan in. The really good players, and the really mature guys, and the really intelligent guys understand that, and they benefit from that approach.”

McCaffery’s entire team seems to have taken his one-game-at-a-time mentality to heart, including guard Joe Wieskamp. The Muscatine, Iowa, native attributes the Hawkeyes’ strong performance to the lessons they learned on Saturday and the knowledge they gleaned from their head coach at practice.

“I think we learned our lesson from Gonzaga,” Wieskamp said. “We knew that [Saturday’s game] was an opportunity, and we didn’t take advantage of it. We had a lot of mistakes defensively, transition. So, I think we really watched the film, took that criticism to heart, focused on ways in which we can improve, realizing that we’re a team that can score the ball with any team in the country. At the end of the day, we’ve got to get stops.”

For McCaffery, his 2020-21 squad is breathing rarified air, bouncing back from a tough loss on the road with a big win to open the conference season just three days later. According to the head Hawkeye, teams with the maturity to put together a great showing after a gritty loss are few and far between.

“It would’ve been different for other teams,” McCaffery said. “I’ve had some teams that I think could’ve handled it. I think you started to see it last year with this group. With the group of guys we have, you saw it. They understood how to play on the road, how to play back-to-back. We didn’t have the depth we have now last year. So, really a lot fell on the shoulders of Luka, Connor [McCaffery], C.J. [Fredrick], and Joe [Wieskamp]. . . So, this team is special in that regard. I think we all would’ve expected them to be. They’re veteran guys, they’ve been through it.”