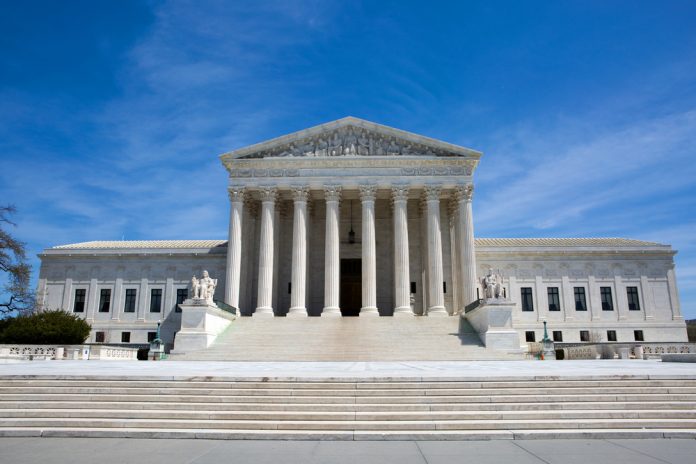 On Monday, the US Supreme Court ruled that the US government can prevent immigrants from countries in crisis who illegally entered the country and later received protection from deportation from becoming lawful permanent residents.

In a unanimous decision, the nation’s high court ruled that a man from El Salvador, Jose Santos Sanchez, who illegally entered the country and later received Temporary Protected Status can be denied the right to become a lawful permanent resident.

The high court ruled in Sanchez v. Mayorkas that an immigrant with a TPS designation can still have an application for lawful permanent residence rejected.

Justice Elena Kagan authored the court’s opinion, concluding that while the TPS program “gives foreign nationals nonimmigrant status,” it “does not admit them.”

The question was posed in the court regarding the man from El Salvador, who entered the United States illegally in 1997, but was granted TPS in 2001, could become a lawful permanent resident. Jose and his wife, Sonia Gonzalez, have four kids, the youngest was born in the US. So even if illegals are not able to achieve permanent resident status, if they have children here, their children are automatically American citizens.

The couple received TPS following a series of earthquakes in El Salvador in 2001. Interesting how there are still people living in El Salvador today, meaning the country still kept functioning after the earthquakes, but the US gives an incentive to those that leave their nation and enter illegally.

TPS designation has been given to over 400,000 immigrants from certain countries where conditions prevent immigrants in the U.S. from returning safely. The designation is also given to countries that cannot handle the return of nationals adequately. Countries may be designated for TPS status based on ongoing armed conflict, environmental disasters, epidemics or other extraordinary conditions.

Judge Kagan argued that there is a distinction between “lawful status” and “admission,” arguing that they are distinct concepts in immigration law: “Establishing one does not necessarily establish the other.”

“On the one hand, a foreign national can be admitted but not in lawful status — think of someone who legally entered the United States on a student visa, but stayed in the country long past graduation,” wrote Kagan.

“On the other hand, a foreign national can be in lawful status but not admitted—think of someone who entered the country unlawfully, but then received asylum.”

Certainly, the TPS program allows Sanchez “to remain in the country; and it deems him in nonimmigrant status for purposes of applying to become an LPR. But the statute does not constructively ‘admit’ a TPS recipient.”

In 2014, Sanchez applied under immigration laws to obtain legal permanent resident status. However, the U.S. Citizenship and Immigration Services rejected his application and ruled that he was ineligible due to his illegal entry into the country.