The police warns about pieces of cardboard between the front door! Call the police when you see this! 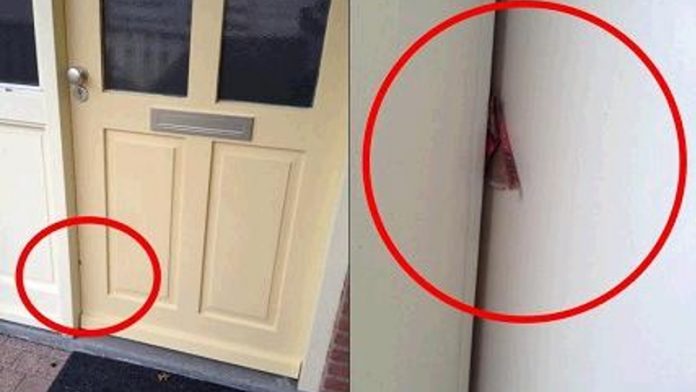 A friend from New York City, who lives close to the Bronx Zoo, told me about this and I would like to share it with everyone else. It’s a lot of people’s biggest fear: coming home to find out your home had been robbed. We often leave on a few lights when we’re out for the evening, but what about when you’re on holiday? The police strongly recommend checking your front door to see if there are any pieces of paper or cardboard there. If you do find some, you should immediately contact the authorities!

The police has discovered this trick which burglars like to use. By placing a piece of cardboard between the door and the doorjamb, a burglar tries to find out whether or not the inhabitants are gone for a longer period of time. If the burglar comes back after a few days and finds the cardboard in exactly the same place, he’ll know that he can likely go in without much trouble.

If the cardboard is gone, he knows that someone has been home. That means there’s more risk involved with going in. This is a variation on the trick of placing a coin or a small branch up straight against the door. If it’s still there after a while, chances are no one has been home since the last time the burglar was there. So, keep an eye out for pieces of paper or other suspicious things near your door.

You don’t want to attract burglars because they know you’ve got something worth stealing in your home. Put your bicycle or scooter inside the garage to prevent burglars from stealing it.

Have you just bought an expensive electronic device like a new TV? Don’t leave the cardboard box outside next to your bin. If you do, you’re making it very obvious there’s something shiny and new inside your home.