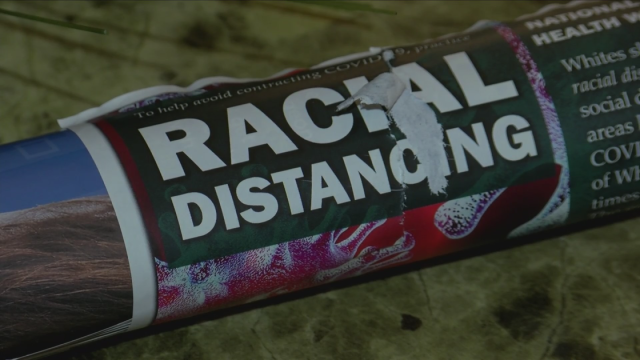 DAVENPORT, IOWA – A husband and wife in Davenport are shaken after a hateful message showed up on their driveway.

Michael and Starr Doak picked up a rolled-up paper to find a disturbing note targeting African-Americans.

Michael Doak was taking a walk Thursday when he found something odd in his driveway.

“I was just kind of wondering out around back, and I found this propaganda material laying in the driveway,” he said. “It was very, very racist. It disturbed me, and made me very angry.”

Doak has been marred to his wife, Starr, for 11 years. Starr is a military veteran, and recently was presented with an American flag as a thank-you for her service.

After she caught her husband trying to throw away the note, seeing what it said made her realize this is happening more and more.

“It’s happening here. It’s all on Facebook, it’s on the news, but when you finally experience it, it’s beyond disturbing,” she said.

There’s no place in the world for things like this, she said, adding it feels like a personal attack on the couple.

“Our neighbors didn’t get one,” she said. “See, we have a car port so you can see us. Our backyard is not fenced in so when I saw it, it was like ‘Oh my God.’”

“So if they’re hiding in the shadows are they ashamed of being who they are?” Starr asked. “Are they in a management position and their corporation would frown upon their beliefs?”

Starr wants to make sure one thing happens after this latest incident: “I want our community to be alert that people like this (whoever left the message) are here.”