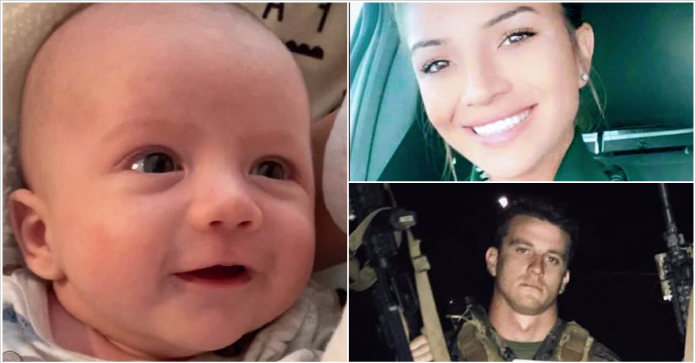 The one-month-old son of two sheriff’s deputies has been left orphaned after both of his parents died by suicide within days of each other. Both were joy-filled, first-time parents excited about their growing family, enamored with their baby and so in love with each other. Tragically, for reasons completely unknown and totally out of character, the 24-year-old man took his own life December 31st, 2021. Reeling from the shock of loss, the 23-year-old woman took her own life two days later.

According to a statement from the Sheriff’s Office on Tuesday, the couple from Florida, 24-year-old Clayton Osteen and 23-year-old Victoria Pacheco, tragically passed this week, leaving behind their baby boy named Jayce who was born on November 22, 2021. As per the statement, on New Year’s Eve—shortly before the clock struck twelve—the agency responded to a call that Osteen, who was off duty at the time, had attempted suicide.

Although he was immediately transported to the hospital for his injuries, on January 2, his family had to make the very difficult decision to remove him from life support, the statement reveals.

According to reports, a couple of days later, on Tuesday, the sheriff’s department learned that Pacheco also died by suicide. “As sheriff, I saw these two deputies as young, ambitious, and a great compliment to my already amazing group of professionals. To the general public, and sometimes even myself, it’s easy to view law enforcement as superhuman… but let’s not forget that they’re human just like us,” Sheriff Ken Mascara said.

“Law enforcement deal with not only the day-to-day stress we all face but also the stress of those whom they serve in our community, which can sometimes be very challenging,” Mascara continued.

“While it is impossible for us to fully comprehend the private circumstances leading up to this devastating loss, we pray that this tragedy becomes a catalyst for change, a catalyst to help ease the stigma surrounding mental well-being and normalize the conversation about the challenge so many of us face on a regular basis.” Osteen and Pacheco had reportedly served on the force since November 2019 and February 2020, respectively.

According to Osteen’s obituary, during his time on the force, he “became a SWAT team member, Deputy of the Quarter, and was awarded Deputy of the Year, 2020.” He reportedly “also served in the United States Marine Corp and led infantry Marines as a non-commissioned officer.”

His loved ones remembered him as “one hell of a funny guy, someone you could always count on in the time of need, and loved being an uncle.” They also wrote that he “absolutely adored his significant other and mother of his child. But of all his accomplishments, he was most proud of being a dad.”

A GoFundMe Page has been set up to help support baby Jayce. “Clayton and Victoria were joy-filled, first-time parents excited about their growing family, enamored with their baby Jayce, and so in love with each other. Tragically, for reasons completely unknown and totally out of character, Clayton took his own life on December 31, 2021.

Reeling from the shock of loss, Victoria took her own life two days later,” it states. “Baby Jayce now needs the support of community and country to help provide for him going forward. The families of Clayton and Victoria are so grateful for all prayers and support received. All donations will be used for enriching Jayce’s life experiences and securing a brighter future.”