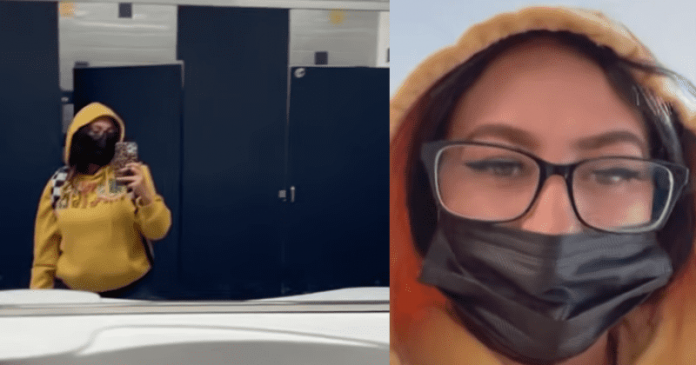 A 30-year-old woman dressed herself up in a hoodie, glasses, and a face mask to pose as her young, teenage daughter and attend her middle school. The mother nonchalantly strolled into the middle school wearing a yellow Marvel hoodie and a backpack on her shoulders. She walked past students and had conversations with teachers for hours that day. Nobody noticed that she was a full-grown adult posing as a middle-schooler until the 7th period of the day.

“I’ve been here all day, face-to-face with teachers,” she said in one of the videos she posted on YouTube.

Casey even took off her mask during lunch and ate her meal in front of others. Even then, nobody realized she couldn’t be a middle school student.

In the footage she recorded of her day in the middle school, the woman was seen receiving directions from students and even sitting in different classes. The 4’11” tall mother, weighing 105 pounds, also attended gym class, where the coach asked her who she was. Casey then claimed she was Julie, who is actually her 13-year-old daughter going to the same school.

Her act was up after a teacher caught her and confronted her towards the end of the school day. That’s when Casey claimed she was conducting a “social experiment” to bring out the flaws in the school’s security system in the middle school in San Elizario in Texas.

However, her social experiment came at the cost of criminal charges being placed against her name.

The school had contacted the police and Casey was charged with suspicion of criminal trespassing and tampering with government records.

Casey said her intention was to explore how easy it was for a stranger to do what she did. This is especially concerning because currently, news of mass shootings is a regular occurrence in the country.

“The school was so concerned that my phone was out that they weren’t even paying attention to who I was,” she said in one of the videos she posted.

“This is about our children and the safety of our children,” the mother also added. “That’s all I’m trying to do is prevent another mass shooting.”

Casey uploaded the following video and explained why she posed as her daughter and went to the school.

After she was arrested, Casey was booked into the El Paso County Detention Facility. Along with the charges she was facing in connection with her “undercover” school case, she was also facing a traffic warrant from a different incident. Her bond was set at $7,908, and it is believed that she was eventually released from custody.