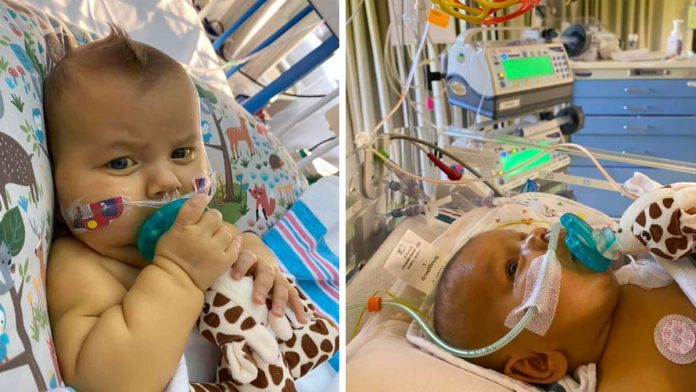 He was only six months old when he died. The little boy from Georgia was born with gastroschisis, a rare birth defect, and needed a five-organ transplant, but he died while waiting for the potential life-saving surgery. Not long after Wyatt was born on December 3, 2020, he had to go to the hospital to be treated for liver failure. But then doctors realized there was only so much that could be done for him at the hospital in Georgia.

His family decided it was time to pack up and move 700 miles away so Wyatt could be under the care of doctors at Miami Holtz Children’s Hospital.

“He’s going to need a whole new liver along with four other organs, the small intestine, large intestine, the pancreas, and the stomach. It’s not often they have to do transplants like this, so that’s why we are down here,” his mother Courtney Patterson said.

For two months, Wyatt waited for a five-organ transplant all while continuing to battle his declining health.

But on June 23, his mother, who had been posting updates on Facebook about her son’s health on.

“Our sweet baby boy made his way up to heaven this morning. He fought and fought, but his body was just working too hard against him.”

“You were a part of me and now it feels like a huge piece of my life is missing” she wrote. “Rest In Peace my sweet little guardian angel. We will be together again someday. This world didn’t deserve someone as sweet and perfect as you baby.”