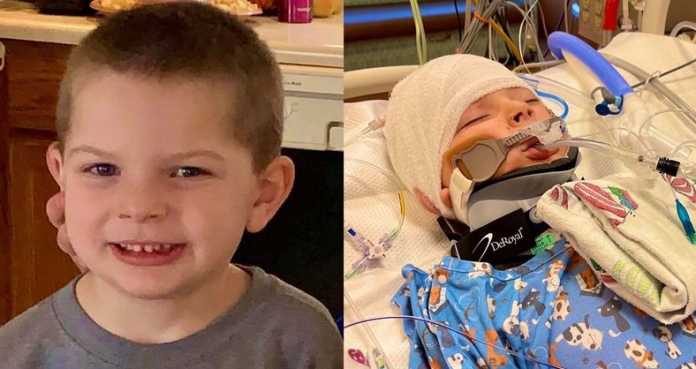 A little boy seems unrecognizable to family members as he lies in a coma after a terrible accident that took place in his school playground. The 6-year-old boy had stepped out of his classroom for recess and was in the playground on Friday. At the same time, somebody on the other side of the fence was mowing a lawn. Out of nowhere, a piece of rebar flew out from underneath the lawnmower and landed right on the boy’s head with great force.

“It went through the chain link fence. And he happened to be bending down,” the boy’s aunt and godmother, Michelle Koertgen said. “Had he been standing up, maybe nothing more than a broken leg had occurred.”

Immediately after the incident, Alex’s mother received a call from the elementary school in Wisconsin and was informed about her son being struck by the piece of metal.

“My sister proceeded to where he was and found her son lying on his back with blood coming out of his head, and he was not conscious but he was having basically seizures,” Michelle said.

With severe injuries, Alex was immediately rushed to the hospital and needed brain surgery. Doctors found that a piece of Alex’s skull had lodged into his brain, and he needed half of his skull to be removed because of the swelling.

“He swelled up yesterday and it looks like today he swelled up more,” Michelle said. “To be honest it doesn’t even look like my nephew that’s how truly horrific this is.”

The child was placed in a medically induced coma for 72 hours, and thus began the family’s wait to see how the rest of his recovery might go. It’s a waiting game sadly,” Michelle said. “Seventy-two hours may not seem like a lot but it’s a lifetime when you’re sitting there watching my nephew, my sister’s son sitting there with tubes coming out of every orifice of his body. I mean it’s just horrific.”

Along with worrying about Alex’s recovery, the family is also outraged that somebody chose to mow their lawn at a time when kids were out playing in the nearby area. “Why are you mowing the grass when children are around?” Michelle said. “School is what, 9 a.m. to 3? You can’t do it before or when they are not at recess? At the moment, Alex is closely being watched at the hospital, and his family is rallying around to support him.

“My sister has not left his side since the moment it happened,” Michelle said about Alex’s mother, Caryn Hook. Alex’s brother, 10-year-old Nathan, reportedly has special needs and is aware of his younger brother’s injury. However, Nathan does not know just how grave the situation is.

Both brothers are extremely close, and Michelle said, “They do everything together. They love each other. They both are just the happiest, most affectionate, wonderful boys you could ever meet.”

To meet the mounting medical bills, the family has set up a GoFundMe page to push through this tough time. While the family still waits for the next step in Alex’s medical treatment, they are grateful to see thousands of people offer support and help through social media. More than 6,000 people have joined the Facebook page, Alex Hook’s Support Page, which is “dedicated to the moral, community, and financial support” of the young boy.