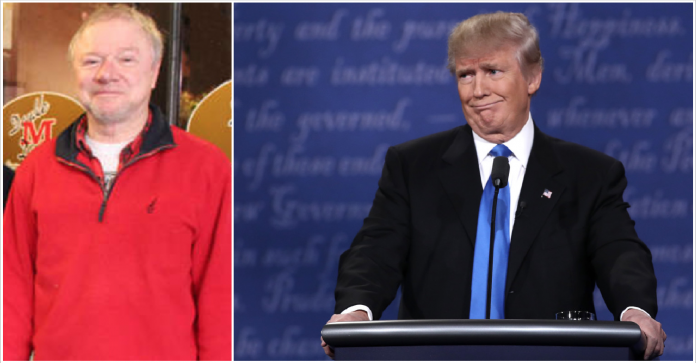 To show his support for Donald Trump he would do anything, even become a serial pooper. A 70-year-old man was busted for urinating and defecating in his Democratic neighbor’s yard. The former high school teacher was allegedly seen by his neighbor, squatting and relieving himself near a hedge outside his home.

When police arrived, the neighbor detailed the disturbing incident and also described the clothes the perpetrator was wearing at the time. After learning the direction in which he was seen going, officers began their search and ultimately found the culprit who identified himself as Jerry Detrick.

Detrick was picked up in a police cruiser to discuss the incident. Initially, he denied the defecation claims saying he just walked past Guyette’s property. However, on further questioning, the 70-year-old confessed to urinating in the yard of his neighbor. When Greenville PD Sergeant Jason Marion arrived at the scene to have a word with Detrick, he witnessed a wet spot in the area where the man had been previously squatting.

Following his release, Detrick told officers that he had actually pooped in the same yard “multiple times” in the past, per a police report of the incident. Revealing the reason behind the disgusting act, he said his neighbors were all Democrats who supported Joe Biden while he was a staunch ‘Trump man.’ “This leads me to believe this incident is politically motivated,” wrote an officer in the police report. Detrick was issued a misdemeanor citation for littering and was warned not to trespass on Guyette’s property again. The former high school teacher is set to be arraigned on June 8.

Finally, after Detrick was caught, Guyette celebrated the moment by sharing the news on social media. While doing so, he also alleged that Detrick has been pooping in his yard since Obama’s first term in office. “An eventful early morning. Finally caught the man who’s been s******g in our front yard for the past ten years,” he wrote on Facebook. Detailing the encounter in the comment section, he shared: “I actually was taking the new dog around the year on the leash before going to bed.

I glanced over to the privet hedge between us and Connie. That’s when I saw him squatting own and his back to the hedge. I went over and confronted him. I was literally right in front of him when he started to get up.” Guyette went on to reveal that Detrick “appears to have a drinking problem, as well as possible mental problems” and that “he would leave 3 or 4 crumpled up restaurant napkins he used to clean himself” on the property. “That was my clue that I had had a ‘visitor,'” he added.