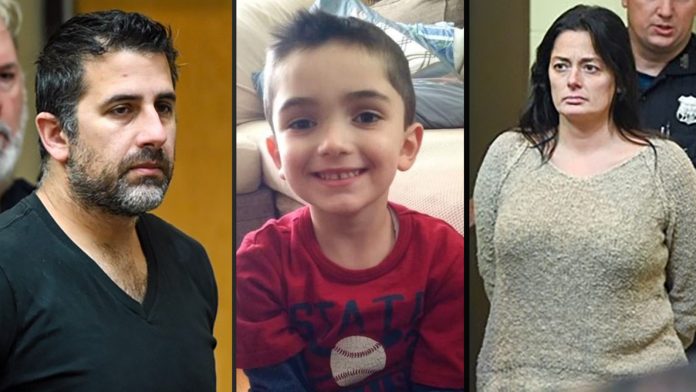 Michael and his ex-fiancée Angela are facing murder charges in the death of 8-year-old Thomas, who froze to death on Jan. 17, 2020. The couple is accused of locking the young boy in their Long Island home’s frigid garage overnight.

His housekeeper testified during pre-trial hearings. During her testimony, she spoke of retrieving cleaning supplies from a mudroom in Valva’s Long Island home where she said the family dog, “Bella,” slept.

It was 19 degrees Fahrenheit the night Thomas Valva was locked in his family’s garage last winter. An autopsy concluded the child died of hypothermia.

Rodriguez also testified that she heard Thomas Valva sobbing when she entered the home to clean it on the day of the boy’s death. The worried housekeeper said she later asked Pollina what happened.

“I asked her who was crying; she said ‘Thomas is,’” Rodriguez said. “‘He fell running for the bus.’”

Pollina then allegedly reassured Rodriguez that the boy was fine.

“‘Yeah, he’ll be okay,’” the housekeeper recalled being told.

Rodriguez later said she saw Michael and Angela Pollina take the child into the home’s basement. Shortly after, however, the boy stopped breathing.

“And then I looked over my right shoulder, and I saw Mike, Thomas and Angela,” Rodriguez testified. “[Thomas] was being, like, escorted between both of them, but he was in front of them.”

The housekeeper told the court that she raced to Michael Valva’s side as he administered CPR to the 8-year-old.

“I knelt by Thomas’ head to hold him steady while Mike was compressing his chest,” she added.

By then, the child’s lips were “blue,” Rodriguez recounted.

“He was completely naked,” Rodriguez said. “He was very blue.”

Meanwhile, Valva’s attorneys questioned whether authorities had the legal right to enter the former police officer’s home last January. Attorney Matt Tuohy claimed that Angela Pollina had signed a police search order after she’d been sedated with Xanax at a hospital following the incident.

“She never gave anyone permission to enter the house,” Tuohy. “They should have gotten a warrant. These are really important issues that permeate the whole case.”

Michael Valva also allegedly mocked his 8-year-old son shortly before he was rushed to hospital, according to surveillance footage obtained from the home.

Suffolk County prosecutors previously described the family’s home as a “house of horrors.”

“The depravity of these defendants is shocking,” Suffolk County District Attorney Timothy D. Sini previously said. “They caused the death of this little boy and then they watched him die.”