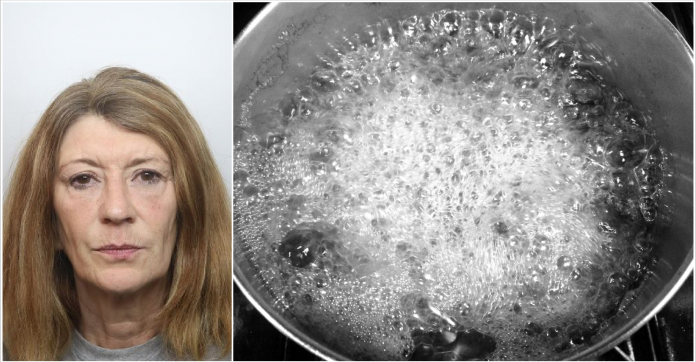 According to the court documents, the 59-year-old woman was convicted of murder for the attack of her 81-year-old husband, at their shared home. She filled a garden bucket with the scalding hot water and threw it onto his arms and torso as he slept. She then fled to a neighbor’s house and admitted what she’d just done.

“I’ve hurt him really bad,” she cried to her neighbors. “I think I’ve killed him.”

When first responders arrived at the scene, they found Baines whimpering in bed. The liquid caused the flesh of his arm and hand to peel off.

The officials have reported that the sugar placed into the water makes it viscous. It becomes thicker and stickier and sinks into the skin better.

It left her husband in agony, and rather than call the emergency services, she wasted time by going to a house nine doors away to tell a neighbor, who she wasn’t close to, what she had done.

Baines initially survived the attack and was rushed to Whiston Hospital. However, he died of his injuries a month later in the hospital.

Initially, Smith was charged with grievous bodily harm. Those charges were upgraded to murder upon her husband’s death.

“Smith killed her husband Michael in such a painful and cruel way,” said Hughes. “To throw boiling water over someone while they are asleep is absolutely horrific. To also mix three bags of sugar with the water showed the determination she had to cause serious harm.”

It was not clear what events provoked the attack.

Smith was found guilty of murder on Tuesday after a five-day trial at Chester Crown Court. Following the verdict, the Crown Prosecution Service said Smith admitted that “it happened when she lost control.”

“She was clearly upset about the dispute,” said CPS Mersey Cheshire’s Jayne Morris. “But the evidence demonstrated that she was in control and acted in anger when she poured the lethal mixture over her husband and wanted to extract revenge.” The woman will be sentenced on July 9.