Adoptive parents in Iowa have been accused of abusing their 16-year-old special needs son by tying him to a bed frame, denying him food and refusing to give him access to a bathroom 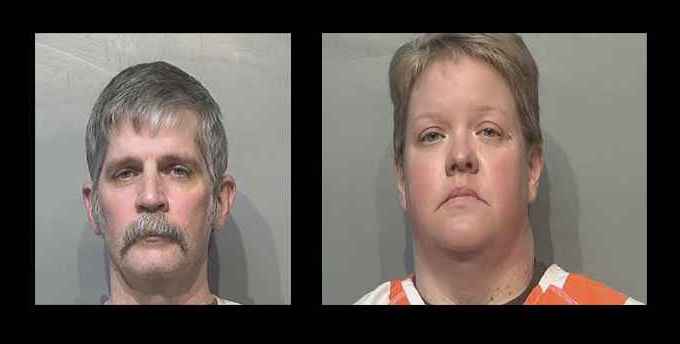 The couple from Iowa are now facing charges of first-degree kidnapping and neglect of a dependent person in connection with the alleged abuse. The 16-year-old special needs teen weighed just 79 pounds when he was removed from their home by the Department of Human Services. Medical staff determined he was suffering from severe malnutrition and had multiple non-healing abrasions and bruises from ongoing abuse he allegedly endured for years.

The teen also had bone deformities to a foot that authorities believe was likely caused by being forced to wear shoes that were too small for an extended period of time.

The Pleasant Hill Police were called about possible abuse in the case on Feb. 22 after someone reported that Jennifer had brought her special needs son with her to work at Smith Automotive in Pleasant Hill and had zip-tied him to a chair by his left ankle and back pants belt loop, according to the court documents. The teen was sitting in the reception area adjacent to his mother’s desk when police arrived at the store.

He was removed by the Department of Human Services and taken to the local hospital, where the full extent of the abuse was determined.

Authorities said the investigation revealed the 16-year-old was routinely confined to his bedroom for several months and would sometimes be tied to the bed frame with zip ties.

He was prohibited from leaving the room without permission—even to go to the restroom—and was often forced to either urinate out his bedroom window or wet the bed, authorities said. The couple allegedly installed an alarm on his door to alert them if he ever tried to leave the room to go to the restroom, according to the court documents.

If he did wet the bed, the couple punished him by removing his mattress and blanket and forcing the teen to sleep on the floor, investigators said.

The Ryans also allegedly regularly denied him food, only giving him lunch or dinner consisting of leftovers from the day before.

The teen attempted to sneak food and hide it in his bedroom, but if he was ever caught, authorities said he would be punished by being deprived of a meal, according to the court documents.

Police said the teen also endured physical abuse and was often thrown to the floor or struck in the face or head with wooden back scratcher.

When the COVID-19 pandemic hit, Jennifer began bringing the teen with her to work at the automotive store whenever his father was also at work. She allegedly zip tied him to the chair “for the duration” of her 8-hour shift, forbidding him to use the bathroom or drink water during the time, the documents said.

The teenager’s biological mother, Shelly Green, said that she had lost custody of her son in 2012 because she was abusing alcohol at the time and was living in poor conditions.

“We were living on space heaters. I couldn’t afford propane at the time,” she said.

Her son, who was 7 years old then, was placed in foster care and the Ryans’ ended up adopting him that same year.

Green, who said she’s now been sober for 10 years, said she never knew her son was being abused.

Green’s two other children, both daughters, were adopted by their paternal grandmother Julie Reben in 2012. Reben told the local news outlet she had tried to adopt the boy as well, but she wasn’t allowed to because she wasn’t his biological grandmother.

Reben and Green said they have contacted the Iowa Department of Human Services to try to gain custody of the teenager.

“I know he is going to be traumatized, and I know the pain isn’t going to go away on its own, but with our love I know this will work,” Green said.

The Ryans are expected to appear in court for a preliminary hearing on Thursday.