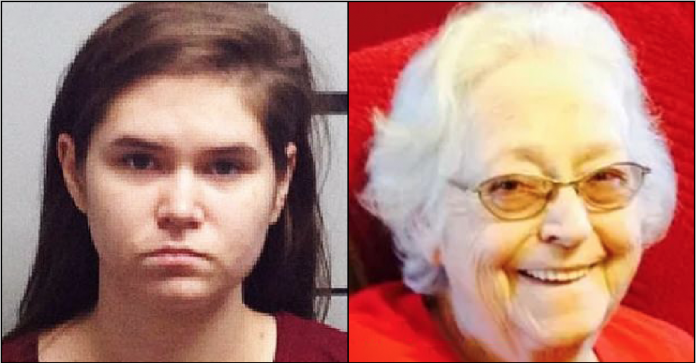 An Arkansas woman has been sentenced to 36 years in prison after admitting to killing her sleeping grandmother with hammer blows to the head because she said God ordered her to make a sacrifice so she would not be sent to hell. She crept into her grandmother’s bedroom and struck her with a hammer approximately four times.

Her name is Andrea Wilson and she pleaded guilty to first-degree murder, aggravated assault and battery in the death of her 81-year-old grandmother Ruby Ross, who was found dead in her Pea Ridge home on May 16, 2018.

The 28-year-old woman received a sentence of 36 years in prison after prosecutors agreed to a plea deal as a result of mental health evaluations and pleas for leniency from Ross’ family.

Wilson crept into her grandmother’s bedroom and struck her with a hammer approximately four times. She apparently believed that May 15, 2018 was her last day she’d be able make a sacrifice to appease God. Wilson later said she had not been taking her prescribed lithium at the time of the murder.

The following day, Ross’ daughter, LeAnn Ross, discovered her mother’s body in the bed after she grew concerned when she couldn’t reach her. Ross had a large open wound to her head. Her hands had been covered with a pink bath towel and she was cold to the touch.

Wilson put the bloody hammer, rubber gloves, a large knife and bank statements with the name Andrea Wilson on them in a garbage bag and hid them in an outbuilding on the property.

Investigators learned that before Ross was killed, Wilson had been involved in another violent altercation. Earlier in the day she struck a bicyclist with her car. The bicyclist told authorities that after Wilson struck him, she tried to drive back toward him, but she hit a boulder with her car and got stuck on the rock.

Wilson was evaluated by mental health experts hired by prosecutors and the defense, but the experts were unable to agree on whether or not Wilson had known the criminal nature of her actions.

Her aunt, LeAnn Ross, asked the judge for “mercy” in the sentencing, saying her niece had a difficult childhood filled with neglect as a result of her parents’ drug problems.

A visibly emotional Wilson also addressed the court and apologized for hitting the bicyclist and bludgeoning her grandmother to death, saying there were not enough words to describe the remorse she felt.

Wilson was sentenced to 36 years behind bars in the Arkansas Department of Corrections with a 10-year suspended sentence once she is released. She will be eligible for parole after 19 years.