Arkansas woman has been accused of faking her adopted son’s mysterious illness, forcing him to endure painful and unnecessary medical procedures for collecting thousands of dollars in donations 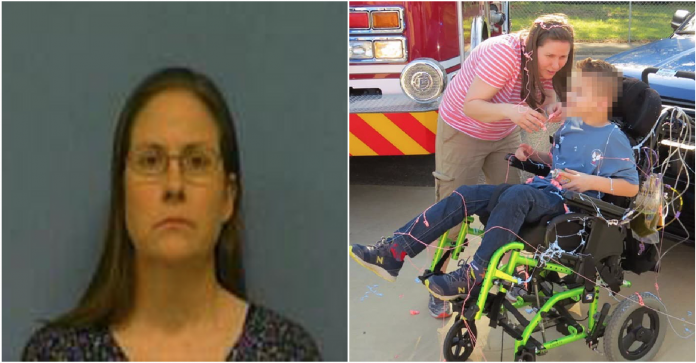 The woman is now facing charges of endangering the welfare of a minor in the first-degree after authorities said she purposely engaged in conduct creating a substantial risk of death or serious physical injury for her son.

Kristy and her husband are also being sued for fraud in civil court by Arkansas Attorney General for collecting thousands of dollars in donations while carrying out the alleged ruse.

“Essentially Kristy and Erik falsified their child’s health condition and received more than $31,000 in charitable donations and contributions from Arkansans who were quite simply looking to assist a family in need.”

She described the young boy as having a rare chromosomal abnormality that led to him being globally developmentally delayed, writing that his undiagnosed GI issues still didn’t stop his smile from stealing hearts.

Kristy said the young boy, whom they adopted in 2014, had his first seizure at the breakfast table in 2017 and his health continued to decline from there, eventually requiring a feeding tube.

In 2019, the 9-year-old was brought to the Mayo Clinic where a team of medical professionals evaluated his case and determined the pain Kristy had described her son feeling was not seen in the clinic.

Authorities say that Kristy continued to exaggerate the child’s symptoms leading to unnecessary medical care, interfering with the care process and providing false representations to his medical team.

After the boy was examined by a team of medical professionals, doctors concluded that the boy had been a victim of Munchausen by proxy, a condition where a caregiver provides false information about physical symptoms or induces injury or disease in another for their own benefit.

Officials say that the Schneider’s received approximately $31,895 in donations.

Kristy was arrested in connection with the criminal charges against her on Tuesday and was later released that same day after posting a $100,000 bond.