Baby, who was diagnosed with fetal growth restriction while still in the womb and spent the first 2 years of her life in hospital, is finally home with her family 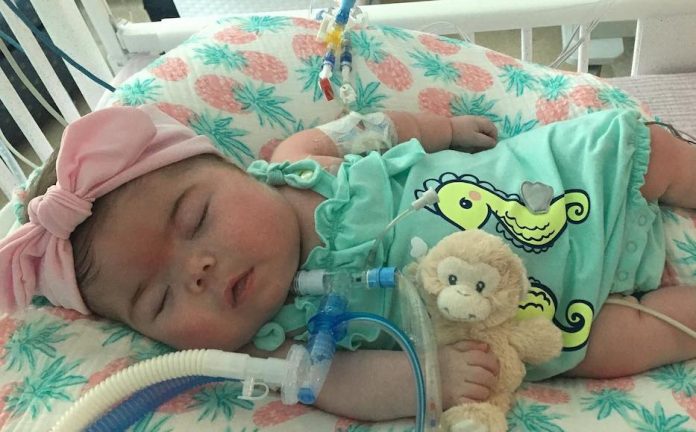 The 2-year-old baby, who was diagnosed with fetal growth restriction while still in the womb, spent the first 2 years of her life in a hospital fighting for her life. The baby’s doctor said that letting the little girl grow in the PICU under the care of her nurses and medical team helped with her breathing episodes, as her lungs continued to develop. The doctor also said that the physical therapy helped with her muscle rigidity and her lungs seemed to improve as her muscles strengthened.

According to her parents, Aliesha and Chris Smith, Addy was reportedly born on Dec. 10, 2019, at 27 weeks and four days. She was born at Sharp Mary Birch Hospital for Women & Newborns.

Fetal growth restriction is a condition where a baby doesn’t grow at a normal rate in the womb and can lead to a lower weight at birth, according to the health officials.

Unfortunately, Addy’s parents struggled for seven years with infertility. They reportedly tried several intrauterine insemination procedures that were unsuccessful but then got pregnant one month before they were supposed to begin the in vitro fertilization process.

During an interview with Good Morning America, the 36-year-old dad, Chris Smith, reportedly said: “We had tried so long. It was never ever on the table, never an option to not see things through with her and not give her a chance. The obstetrician had told us, she just painted a picture of what it would be like for the next, at least couple years, and the rest of her life and we were really like, ‘OK, let’s go. Let’s saddle up and this is what was meant to be.'”

According to Chris and Aliesha, their daughter has underdeveloped lungs and was moved from a ventilator to a continuous positive airway pressure, or CPAP, machine to help her breathe. Unfortunately, just three months after her birth, the girl stopped breathing.

The 35-year-old mom, Aliesha Smith, reportedly said: “The doctors did not think she was going to make it and we were getting ready to say our goodbyes.”

The doctors told the parents that in order to give their daughter a fighting chance, she’d have to be transferred to Rady Children’s Hospital.

In March 2020, the baby was admitted to Rady’s neonatal intensive care unit.

One of the doctors who treated Addy, Dr. Sandeep Khanna, said that the baby had chronic lung disease and had trouble breathing on her own.

It was tricky because sometimes those episodes would resolve [after] maybe 30 minutes or an hour. But sometimes she would have periods of those episodes maybe 10 times a day and she would continue to have it for like seven to 10 days. And it was hard to wean her from heavy sedation and muscle relaxation medications. And that’s why she was stuck in the hospital.”

Few months later, the little girl was still on some form of paralytic drug. But, her parents never gave up on her, even when the doctors and medical personnel didn’t have any clear answers or solutions.

According to the girl’s parents, by March 2022, their baby daughter didn’t have any bronchoconstriction, or muscle spasms in the lungs, when she couldn’t breathe.

The little girl still needs to use a ventilator at home for now. But, her parents are full of hope for their oldest child and want to pass along their hope to others.

The 36-year-old father reportedly said: “It’s been miracle after miracle with her. We’re both so excited to see where she goes and what she can do. And I know she’s always going to continue to blow us away and surprise us.

Addy’s family has launched a GoFundMe Page. “Without any home nursing available at this time, Addy’s parents are her only primary caregivers around the clock. During her 2+ years in the hospital, it became very difficult for the Smiths to keep up with a normal work week.

With ongoing issues with Addy, it was a priority to be by her side, even if that meant stepping away from work and depleting their savings. With ongoing medical bills, a mortgage, and other everyday living expenses, the Smiths are in a bind.

Please help their family cover ongoing expenses as they continue to help Adelynn grow and develop at home… any little bit helps!” the fundraising page wrote.