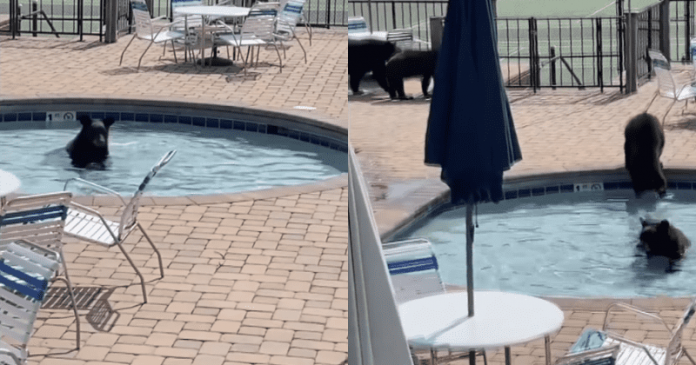 What was supposed to be a pool party in Tennessee, turned into an amusing bear-watching event after a bunch of these furry animals decided to crash the celebration. These guests took their time to enjoy the pool and had a field day with their pals playing in the enclosed area. Thankfully, one of the visitors filmed this unusual encounter before she posted it on YouTube last Tuesday for the world to see.

In the nearly 3-minute clip, a group of bears can be seen swimming in the pool and wandering around the area. One of them can also be seen wading in something that appeared to be a shallow baby pool. About a minute into the video, a second bear is seen entering the baby pool and playing with the first one for a few seconds before getting out of the water body. Next, the bears get into a deeper pool but after spending only a few seconds in it, they get back out to play on the dry surface. Meanwhile, other bears in the pool area were seen climbing over the fence and making their way towards the tennis courts to join their friends.

There were a total of seven bears present in the vicinity, according to Johnson. The JROTC swim party had a few visitors…7 bears. We were safely outside the pool area. Black bears in the Great Smoky Mountains are beautiful but please be respectful, keep your distance, and don’t feed them, wrote Johnson in the caption of the YouTube clip. Before the bears arrived at the location, the human party-goers evacuated the area to maintain a safe distance from their furry guests. In the due course of the video, people were heard marveling at the bears as one of them noted how they managed to grab their party food before the bears arrived.

Johnson shared the video on Facebook and revealed that Chalet Village employees had informed her that bears were frequently seen in the area. However, the group of guests that arrived at the pool was unusually large, taking them by surprise. The guys at Chalet Village said they had never seen so many at one time, she wrote sharing the video. Johnson counted herself and other partygoers lucky to have been at that spot to witness such a large group of cute, cuddly bears. Right place at the right time I guess, she noted.

A bunch of bears decided to take over the pool at Chalet Village this weekend while the Jefferson Co. HS JROTC was celebrating. A couple bears obviously didn’t read the pool rules about not horsing around.