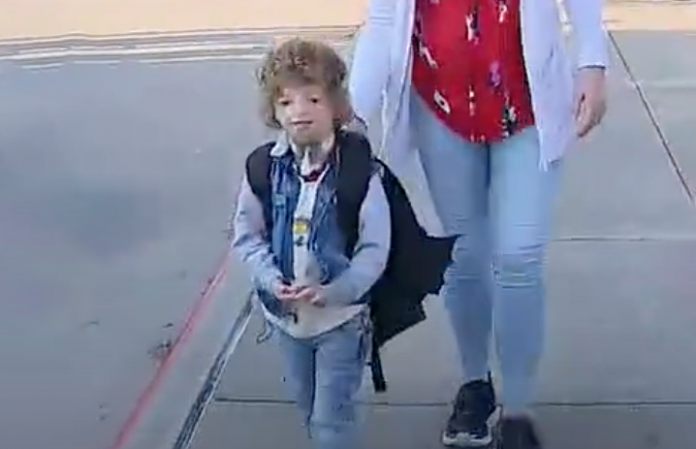 A mom’s plea on Facebook recently tugged at our heartstrings as she urged them to teach their children about acceptance and kindness, ahead of the school year as her son with special needs was about to start kindergarten. In no time, the post went viral and people began sharing kind words of support for Brittany and her 5-year-old Michael. But it didn’t end there. The community actually came together to make sure the youngster’s first day of school was nothing short of perfect.

The voluntary involvement of local firefighters, the police, and two very special guests went a long way in making the day a success. Michael was getting ready to attend school when a fire truck pulled up outside his house. Little did the boy know that two of his favorite superheroes were also waiting inside to take him to school. “Little did I know that we would also have not only police escorts but also Captain America and Batman to accompany us on the ride,” expressed the elated 33-year-old mother. “They waited to pick Michael up until shortly after school had started.”

As Michael stepped outside his home, he was left surprised to see that the entire street had been lined up with police cars and fire trucks. What’s more, he had no clue that all of it was for him. When they finally broke the news, a delighted Michael and his sister, Allison, climbed into the fire truck and even got the opportunity to sound the sirens. The next destination was his school and the convoy headed there with flashing lights. At the school, “the principal had invited all the kindergarten students and teachers outside to welcome us” and “everyone was waving and cheering,” explained Brittany.

While the superheroes delivered high-fives to the kindergarten students, Mrs. Pearson, Michael’s teacher welcomed her newest student with a hug and told him that all of the arrangements had especially been made for him. “Then we walked him inside and I wiped a few tears from my eyes before dropping him off with his classmates,” shared the emotional mother.

Just a few days before Brittany, who runs a real estate business with her husband, was extremely worried about the environment her son was about to enter. Taking to Facebook, she shared a post, which began with a quote from the 2017 movie Wonder. “Dear God, please make them be nice to him,” she shared.

Her son too was with a rare condition called Treacher Collins syndrome. The condition is a result of a gene mutation that is characterized by “distinctive abnormalities of the head and face.” The condition could pose difficulties while breathing, hearing, and eating, but it does not affect one’s mental development or lifespan.

As for the 5-year-old, his case is considered severe. Although Michael looks “different” physically, Brittany says her is “is mentally the exact same as all the other children. Thus, she requested parents to teach their kids to use words like “different and unique” instead of “weird and scary” for her son.