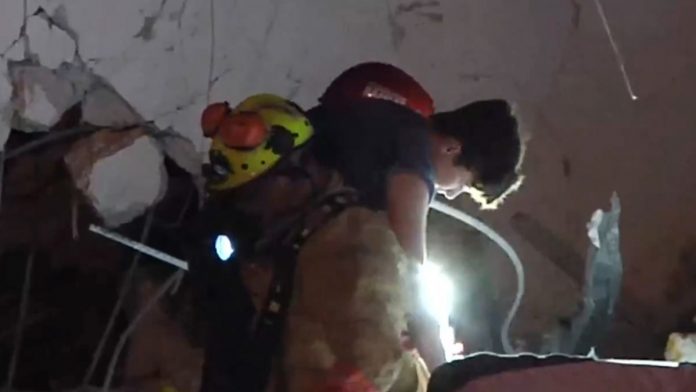 At least one is dead and several more are injured after a 12-story condo in Florida partially collapsed. Over 80 search and rescue teams responded to the devastating scene and immediately began picking through the rubble for survivors. A glimmer of hope arrived when firefighters pulled a boy out from under the debris.

Officials estimate the oceanfront side of Champlain Towers South Condo collapsed around 1:30 a.m.

The mayor of Surfside, which is near Miami Beach, confirmed 10 people had been treated for injuries, two had been transported to the hospital, and one person had died.

However, by 8 a.m. Frank Rollason, director of Miami-Dade Emergency Management said search and rescue teams believe they located all survivors.

“Everyone who is alive is out of the building,” Rollason said.

The tower that partially collapsed was built in 1981 and held more than 130 apartments.

In a press conference, officials stated that 55 of those units had been destroyed.

Police said they were unsure how many people were inside the apartment building at the time, but it was in the middle of the night and the building manager told Mayor Charles Burkett the tower had been substantially full.

Work was being done on the building’s roof, but it is unclear at this time if the construction is related.

“The building is literally pancaked,” Burkett said at a news conference. “That is heartbreaking because it doesn’t mean to me that we are going to be as successful as we wanted to be in finding people alive.”

While some were able to walk out of the building on their own, and firefighters rescued the boy, overall the rescue mission hasn’t been as successful as all would have liked.

“They brought dogs who can sniff for survivors in the rubble,” said Surfside Commissioner Eliana Salzhauer. “They aren’t turning up very much. No one is celebrating anyone being pulled out.”

Ofi Osin-Cohen, who lives on the third floor, said she was asleep in her apartment with her husband when they heard what sounded like thunder.

“It could have been thunder but it didn’t quite seem like thunder. And I said what is going on? Is it raining? We looked outside and I saw a plume of smoke coming up.”

They grabbed a few essentials – phone and wallet – and tried to leave the building, but found multiple exits were blocked by debris.

“There were two elderly people there that we took with us and said, ‘Lets go back t our apartment. We can go on the balcony. They’ll rescue us from the balcony.”