Cruel stepmom dangled boy by hair, starved him, and punished him with 20 hours of exercises as dad watched on 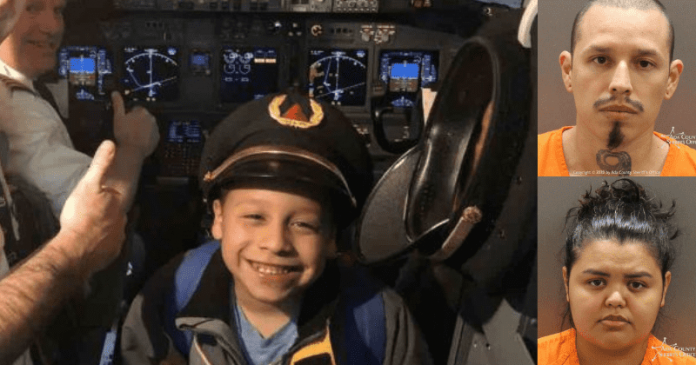 In two-weeks-worth-of-footage recorded by nanny cameras inside a home in Idaho, there wasn’t a single video that showed a 9-year-old boy playing with a toy or a game while staying with his father and stepmother. Instead, what the cameras captured were incidents of horrifying abuse inflicted upon the child in the days that led up to his death. For weeks before the child was found, the little boy was fed only rice and water. He was cruelly denied fast food while he watched the rest of his family devour it. And instead of sleeping in a bed, he was allowed to sleep on the floor or inside a closet most of the time.

His stepmother would also force him to do strenuous exercises for extremely long periods of time. Sometimes, Emrik was forced to do exercises for up to 20 hours a day.

While Monique was working from home due to the pandemic, she would make Emrik to do jumping jacks and wall sits, and would only allow him to stop when she took breaks, according to details revealed by prosecutor Tamara Kelly. The boy’s father, Erik Osuna, did almost nothing to stop his son from being abused, and would allow his wife to beat the boy up with a dog leash because she thought “it was heavier than the belt.”

“He admitted… he did nothing to save his son,” Kelly said about the father.

One video recorded by the nanny cameras shows a severely emaciated Emrik struggling to keep himself balanced on one leg whilst standing in the kitchen with both arms above his head. One another incident, the boy was caught on the floor, sleeping in the fetal position when his stepmother went up to him, grabbed him by his hair, and dangled him in the air before physically abusing him in the kitchen.

Along with calling her stepson “a f—- loser” and “a piece of sh–,” Monique was also seen threatening him by saying she would force him to drink his own urine and eat his own feces.

After months of torture, Emrik’s body finally gave in, and the police found him, covered in vomit and bruises, without a pulse on September 1, 2020.

After finding out about what happened to the boy, his family members shattered over the loss. The child’s aunt, Marie Osuna, “We trusted her. We trusted both of them to take care of him. And it’s not like our family wasn’t more than willing to help. They could have reached out to us, they could have said something, you know, if they were frustrated with him.”

Unable to believe the torture the boy was put through, Marie added, “Why would they starve him like that? It’s just food. What did he do to deserve to be starved or even to be hit, like a dog? He just needed love. He just needed love, that’s it, and to feel safe.”

During a hearing held on Wednesday, March 31, the judge ruled that there was adequate evidence to place first-degree murder charges on the boy’s father and stepmother. In addition to this, Erik’s charges also include evidence tampering and injury to a child. The trial is still underway.