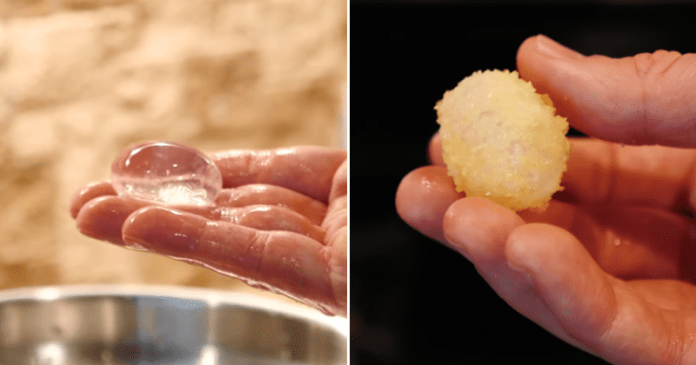 We are sure you have eaten or heard of deep-fried meats, vegetables, fruits, seeds, and maybe even peels. But did deep-fried water cross your mind? Yes, it’s a thing. You can now eat water that has been deep-fried in oil. That does seem impossible and highly unlikely since water and oil don’t exactly mix. Then how does such a thing exist? Humans have figured out a lot of things and this is another thing that will go down in history. And no it is not just hot water. Neither is it plain water because we all know that would be disastrous.

The idea first originated in the mind of YouTube chef Jonathan Marcus in 2016.He knew the dangers and the meaninglessness that came from his idea. But his wild thought process actually paid off and he invented the world’s unhealthiest water.

In the video description, he wrote: This is potentially very dangerous. If water leaks out while the sphere is frying in hot oil, it may explode sending scalding oil everywhere. Do not attempt without proper safety precautions. Do not consume until cooled down or you may get burned. Also, they don’t taste particularly good. You have been warned.

Five years later, deep-fried water is making the rounds again on the internet after another YouTube channel, The Action Labs tried the same. The channel is run by James Orgill, a chemical engineer who carries out various exciting and experiments like deep frying water. “First of all it’s surprising that you can turn water into an edible dish, and it’s a little bit comical to fry it after,” Orgill said. “It seems ridiculous to say, even impossible.” But the scientist that Orgil is, he wanted to give it a shot. He has after all managed to freeze an electric spark in ice.

What Marcus and Orgill did was to make water safe to come in contact with water. They created a membrane around water or as Orgil called it, essentially making “a water bottle” before frying it. They used calcium alginate to make the edible membrane that looked like a big drop of water. They followed it by breadcrumbing it and then fried it in oil. “It tasted really gross though. There’s no flavor, and it just tastes kind of salty and slimy,” Orgill said about his deep-fried water. It would be best to not try this at home because even the slightest break in the membrane will lead to the water expanding rapidly to displace the oil, which can cause a deadly fire.

“There were a lot of cooking channels doing it, but nobody seemed to be talking about the chemistry behind these edible polymers, which I used sodium alginate to make,” Orgill said about his scientifically detailed video. Frying water is now a viral TikTok trend thanks to 18-year-old chef Eitan Bernath. He said, “So many Asian cuisines use agar, so it’s kind of like you’re learning about that food and culture when you try to make deep-fried water.” He thought the fried water balls tasted like jellyfish.