Despite being vaccinated, young woman developed a life-threatening complication and lost both her legs after testing positive for COVID-19 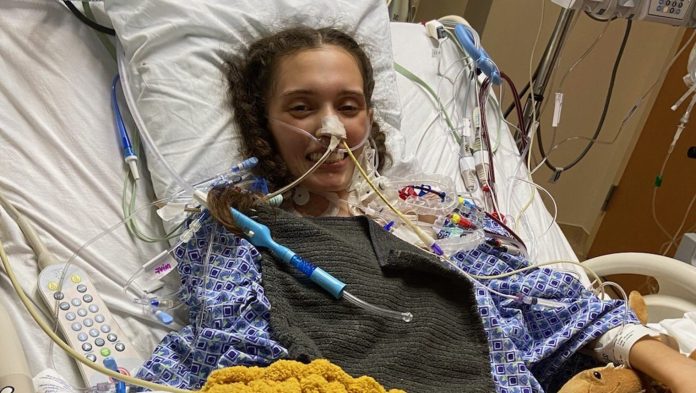 The 20-year-old woman who developed a life-threatening complication and lost both her legs after testing positive for COVID-19, despite being vaccinated, was able to return home after spending more than two months in the hospital. Her family said the 20-year-old woman was born with a congenital heart condition and developed a life-threatening complication after testing positive for Coronavirus. The doctors told the family that this caused pressure to build, restricting blood flow to her legs.

The 20-year-old woman from Florida, Claire Bridges, was released from hospital on Thursday, Newsweek reports.

She is going home for the first time since she was admitted on January 16.

Her family said that Bridges reportedly lost her legs as a result of complications arising from COVID-19.

The 20-year-old woman was reportedly born with a congenital heart condition. Bridges, who was vaccinated, developed a life-threatening complication after testing positive for COVID-19.

The doctors told the family that this caused pressure to build, restricting blood flow to her legs.

Unfortunately, the damage was so severe that it resulted in doctors being forced to amputate both her legs.

The woman’s family also said that Claire’s heart stopped just hours after her admission and she was diagnosed with COVID-19 myocarditis, rhabdomyolysis, mild pneumonia, cyanotic and acidosis.

Claire’s dad, Wayne, wrote on Facebook: “Two months to the day this all started and Claire, for the first time sat up by herself! It may not seem like a lot, but for this Warrior, it’s a major victory! And for this victory, it looks like our Warrior girl is coming home to her mom’s house today for the rehab phase of her journey.”

During an interview with Newsweek, Claire’s father also said that his daughter is very happy to be home around family and friends. The family had a cookout for her on Saturday, which was her birthday.

The family is happy to get Claire out of the hospital life and in her mom’s house and more comfortable surroundings.

Wayne Bridges also said: “It’s been mentally, emotionally taxing but we’re hopeful now. She is still facing more challenges but we are focused on today having her home.

She’s having ongoing rehab with physical and occupational therapy, and healing of her legs to start getting ready for prosthetics.

We are so grateful to Steve Chamberland of the 50-Legs foundation for helping provide prosthetics and getting Claire ready. They had a nice three-day fundraiser to help pay for Claire’s prosthetic legs last weekend.”

The family has started a GoFundMe page to help raise money for Claire’s medical and ongoing recovery expenses.

“Claire was admitted to hospital on Sunday, January 16th, with severe leg pain and Covid. Yes, she was vaccinated! She was then diagnosed with Covid Myocarditis, Rhabdomyolysis, mild pneumonia, Cyanotic, and had Acidosis. Obviously, she was very sick and weak.

A few hours later, the ICU doctor called Wayne and said her heart had stopped and they were administrating CPR. The doctor put the Chaplain on the phone, and while he was on the phone with her for an hour and a half she coded 2 more times.

Thank God they were able to revive her. The doctors and surgeons were collaborating on the next course of action for her heart and other organs. Monday morning she was placed on a Tandem Heart and additional life support.” the GoFundMe Page stated.