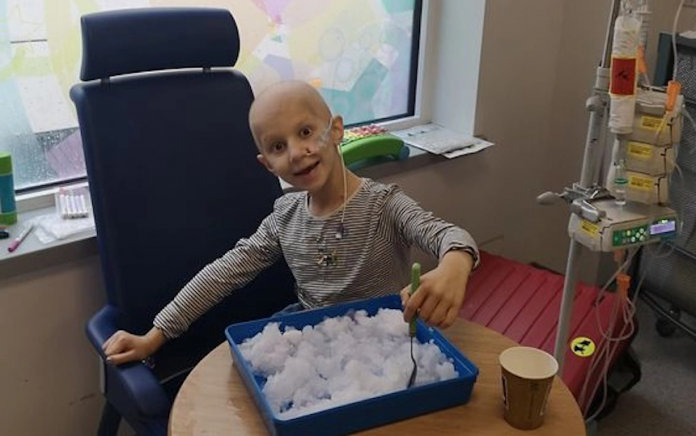 In the midst of COVID-19 restrictions, the mother was unable to get a face to face GP appointment for her 6-year-old daughter and ended up rushing her to the community hospital in where she claims they told her the pain was probably muscular. But, unfortunately, weeks later the child could barely stand up. The mom is now sharing her story with the world after her daughter’s pulled muscle turned out to be a rare form of disease.

The 36-year-old mother from UK, Hannah Potter, thought her 6-year-old daughter, Flo, six, had pulled a muscle in her back, according to reports.

The mother reportedly said when she took her young daughter for a second opinion doctors suggested she was being dramatic.

After the 6-year-old girl was rushed to another hospital with suspected appendicitis, the family’s worst fears were confirmed and the girl was diagnosed with High-Risk Neuroblastoma.

“Partway through the summer holiday in July, she started saying that she had a bad back. She’s always climbing trees and stuff so we put it down to a pulled muscle or something. A few days later she was still complaining of pain and she has quite a high pain threshold so I contacted the doctors but we couldn’t see them because of Covid.

So they said it sounds muscular so to call back if it got worse which I did a week later. They couldn’t see her so I took her to a walk-in centre who said it was muscular and barely looked at her. That happened a couple of times and then I took her to A&E – I thought she might have an infection in her spine and they told me that I was being a bit dramatic.

I trusted the doctors so I believed them. She was getting to the point where she couldn’t get off the sofa or walk up the stairs. We had to stand behind her to make sure she didn’t fall over.

She was no well but the doctors wouldn’t have anything of it. I was giving her Calpol but one day decided to not give her any and take her to the hospital so they could see how bad she was.

I said that I wondered if she had sepsis and they thought she had appendicitis. She was blue lighted to Leicester and the surgeon said she didn’t think it could be that as the pain was ongoing for five weeks. They thought it could be a compacted bowel but one young doctor kept bringing us specialists to help.

She was on morphine and then did an MRI scan and called us half an hour later. They said she had cancer and they thought it was leukaemia. She was taken then to Nottingham where she was diagnosed with High-Risk Neuroblastoma. She was there for five weeks and then we were moved to the children’s hospital.”

The mother also said Flo reportedly started chemotherapy the day after her diagnosis. Flo has now gone through aggressive chemotherapy, losing her curly hair in the process. The mom also shaved her head in solidarity.

“She is really good with it all. They took most of the tumour which helped to ease her back pain – it was nowhere near as bad. She lost her big curly hair and I thought she’d be traumatised when she lost it. But she shaved my head and said, ‘I’ll be alright now!'”

Flo had over 100 areas of cancer throughout her body, even in the bones in her face. In order for her to get stem cell treatment, she needs to be down to three and she still has around 12. She had her last lot of chemo treatment on Christmas Eve which has hopefully brought the numbers down.”

The unfortunate family are now fundraising for a treatment in the US that could prevent the cancer from returning. A GoFundMe Page has already raised over $55,425 of the $340,000 needed.

The mother said there is a vaccine in New York which costs $340,000 so they’re trying to raise money for that.

“If we don’t use the money for that, then we will donate the money to all of the charities that have helped us instead.” the mother said