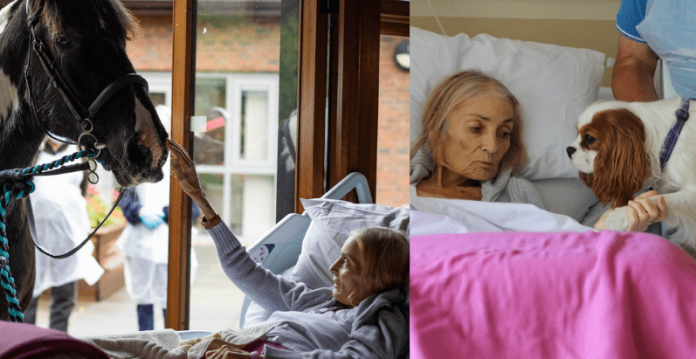 When a woman was told that her days were numbered, she thought she would never get to say goodbye to her beloved animals. But she soon realized that nothing was too much trouble for the hospice staff, who even brought in a full-grown horse inside just so she could bid one final farewell. The 68-year-old woman saw her health recently take a turn for the worse and had to be admitted to the hospital. During this time, she was not allowed any visitors because of the pandemic, and she dearly missed her dogs and her horse.

After a four-week spell at the hospital, the 68-year-old woman, Jan Holman, was shifted to the Hospice of the Good Shepherd. She began receiving end-of-life treatment and could finally meet her loved ones. But she began to think she may never be able to meet her furry companions – her dogs, Monty and Rowley, and her horse, Bob.

“It was just such a relief once Jan was moved from the hospital to the Hospice and we were able to have named visitors who could come and see Jan regularly,” said Dennis, Jan’s husband of 46 years, “however, we never imagined that we would be able to include our dogs Monty and Rowley and Jan’s horse Bob on the visiting list.”

Once the hospice heard all about Jan’s two Cavalier King Charles Spaniels and the 15.2 piebald Cob horse that she had for 10 years, they were determined to bring them to the hospital so Jan could finally meet them again.

“I just can’t believe what the staff here at the hospice have done for me. Until a few weeks ago I was still riding Bob every day and he is such an important part of my life, and I have missed him so much,” Jan said.

“I knew that arranging for my dogs to visit was possible as we had a neighbor who was a patient at the hospice a few years ago and we were allowed to bring the dogs to visit her,” she continued, “but I just didn’t expect that they would ever be able to give me the chance to see Bob one more time.”

On the day of the special visit, Bob was brought to the hospice. Once the horse was in the hospice courtyard, the nurses wheeled Jan’s bed to the patio doors so that Bob could put his head through the doors. The staff saw an emotional reunion as Jan met her loving horse, who nuzzled her neck and lap after spending weeks apart.

For the staff at the hospice, it was worth all the effort to orchestrate the meetup between Jan and her animals.

“It was obvious when Jan first came to us that she is passionate about her animals and that horses have played a large part in her life for many years,” said Louise, deputy ward manager at the hospice. “…The ethos of hospice care is not just about caring for the clinical needs of our patients but also looking after their emotional and spiritual needs as well. It’s about making a difference to our patients and their families in whatever way we can.”