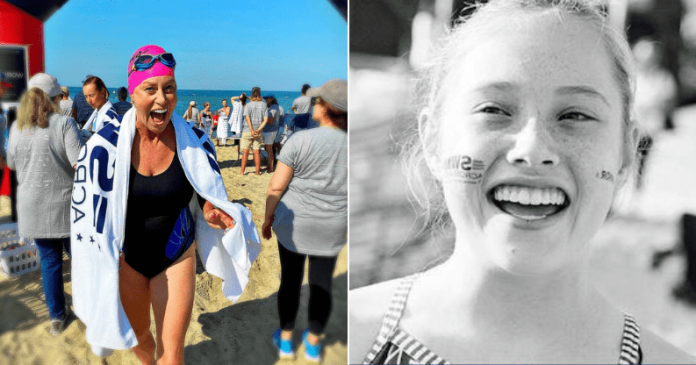 Fifty-two-year-old Vicki from Georgia is on a cross-country swimming mission to honor her daughter, Grace, who died after a three-year battle with cancer. She has taken on the challenge of swimming in 14 open water charity events to honor the 14 years Grace lived on this earth. She is raising funds for cancer research through charity swims. When Grace was 11, she started experiencing pain in her knee and was diagnosed with osteosarcoma, an aggressive bone cancer that caused a large tumor in her left femur.

She had to undergo a partial leg amputation but it did not dampen her athletic spirit. She took up swimming to keep fit while she waited for her prosthetic leg and soon she had fallen in love with the sport. “She would always say, ‘I found running, but swimming found me,’” Vicki said. “She really did just keep swimming.” She even managed to earn a national cap with the U.S. Paralympic team.

But soon Grace’s cancer had metastasized to her lungs. “She underwent 18 rounds of chemotherapy and several surgeries, including a rotationplasty, which used her backward foot to replace the movement of her knee,” Vicki explained. “And she lived her life throughout the treatment. She went to school anytime she wasn’t in the hospital… so she made it easy on us going through that.” In 2017, she received a terminal diagnosis. It was also around this time she found out about Swim Across America and in 2018 it became their top fundraiser for the charity. Vicki would fill in for Grace when she felt too unwell to swim despite not being a strong swimmer.

In 2018, Grace passed away one day before her 15th birthday. “As a mom, you look forward to watching your child breathe their first breath,” Vicki said. “You never anticipate watching them take their last. I hope there are fewer moms who will have to go through that.” But she is now carrying on her daughter’s legacy by continuing to participate in charity swim meets since it was her daughter’s last wish.

“I was not a swimmer before this all happened,” Vicki stated. “I knew how to swim and grew up with a pool, but I’m a little bit claustrophobic and I don’t like putting my face in the water… I credit Grace for inspiring me and giving me the courage to do something that’s really difficult.”

She now finds solace thinking that Grace is cheering her on from up above. “We feel like heaven is cheering us on,” she explained. “You can’t have a better cheering section than heaven. Grace had the best laugh, the best smile, so I think she’s smiling… and not only cheering me on, but she’s showing up at each of the events in small ways.” Vicki is now using this cross-country meet as a healing process.