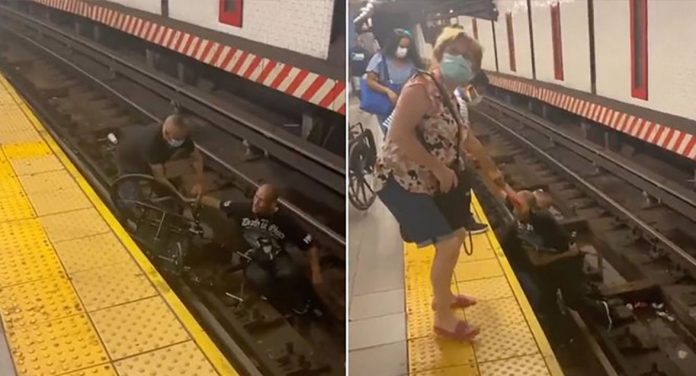 The New York subway can be busy and stressful at the best of times, but for those people who have mobility issues it can also be dangerous.

One man using a wheelchair fell onto the subway tracks at Union Square subway station just as a train was approaching.

Thankfully, there were people nearby who witnessed his cries for help and one man didn’t hesitate to jump beside him and lift him off the tracks.

Others rushed to the platform edge to help hoist the man back to safety just as an announcement that a train was approaching was made.

The good Samaritan who had jumped into the path of danger helped to push him back up to the platform.

The quick-thinking hero was then offered a hand to get back up to the platform himself just before the train arrived on Wednesday at around 1:15 p.m.

“One man jumped right into action,” she said. “He didn’t think twice whether he was going to go on those tracks.”

“I was like, people need this. There’s heroes in action and I was like I’m going to wave my hand at the train and it will all be good. I hope people just take positivity away from all this.”

The man was taken to hospital; his injuries are not thought to be life-threatening.

The post has gone viral on social media, attracting hundreds of comments from people who loved seeing this hero in action.

“It’s great to see people helping people for a change,” one commenter wrote on Facebook. “There are wonderful people out here in this crazy mixed up world.”

“It’s good to see that there are still good-hearted people in this world in need,” another added. “God bless them for saving this person.”