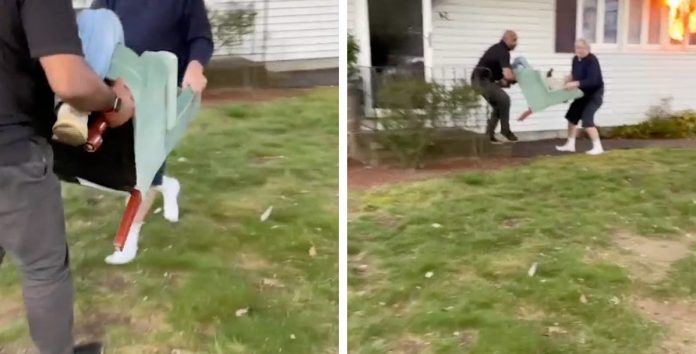 Thanks to several people being in the right place at the right time a 97-year-old woman is alive. And guess what, it was all captured on camera! Lariana was driving when she spotted a house on fire. “The windows were getting blown out from the flames,” she said. She stopped her car and flagged down another driver.

Thankfully, two good Samaritans had already kicked in the elderly woman’s front door and rushed inside to rescue her.

“She was still in her little living room chair, her little velour chair. She was just sitting in there,” Lariana Garvis said.

The woman from New Hampshire captured the dramatic rescue on camera. But just as the woman was brought to safety, her neighbor who assisted with her rescue went into cardiac arrest.

“I realized my phone was still in my hand, so I just tossed my phone and instantly started compressions,” Garvis said. “I didn’t stop. I kept talking to him. I said ‘listen man, you just saved her. You’re not dying.’”

Garvis continued CPR until emergency crews took over. The rescuer is said to be recovering.

The 97-year-old woman and her dog were able to escape the house fire thanks to the kindness of those who were willing to risk their lives.

“Everyone can be a hero every single day. You never really know what’s going to happen to you,” Garvis said. “I was just driving home and I just happened to see it.”