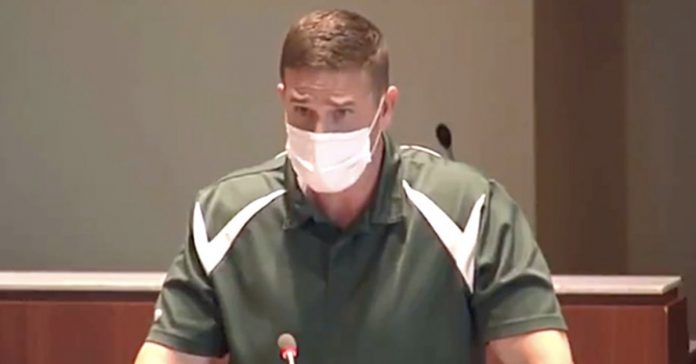 A Christian gym teacher at Leesburg Elementary school, Virginia, has been put on leave after refusing to address transgender students by their preferred pronouns.

In a video posted online, Cross can be seen saying: “My name is Tanner Cross and I am speaking out of love for those who are suffering from gender dysphoria.”

He continued: “It’s not my intention to hurt anyone, but there are certain truths that we must face when ready.

“I love all of my students, but I will never lie to them regardless of the consequences.

“I’m a teacher, but I serve God first, and I will not affirm that a biological boy can be a girl and vice versa because it’s against my religion.

Cross also referred to the recent “60 Minutes” special which highlighted teens who have started the process of “de-transitioning” after rushing through with their decisions to transition to the opposite sex.

In response to Cross’s declaration, the district confirmed that he had been put on paid administrative leave.

“Because this involves a personnel matter, I can offer no further information,” Leesburg Elementary principal Shawn Lacy wrote, according to local paper the Loudoun Times-Mirror.

Cross’s wife, Angela, wrote on Facebook that her husband had been put on leave for daring to speak out.

“As Americans, we believe that every American has the right to their beliefs, but NO AMERICAN HAS THE RIGHT TO IMPOSE THEIR BELIEFS ON OTHERS,” she wrote.

“We spoke out first and foremost to protect the children and also to defend the first amendment rights of teachers and staff.”