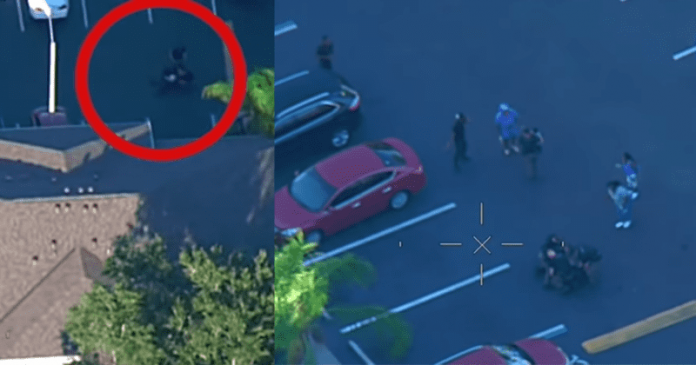 Parents do anything in their power to ensure their children are protected. Unfortunately, the same cannot be said for a man who heartlessly threw his mere 2-month-old infant at the police during an intense car chase. The shocking incident unfolded at the end of a high-speed car chase in Florida.

One of the officers initially noticed a Nissan Rouge being driven erratically in Vero Beach. Thus, they attempted to investigate the driver of the car by pulling him over. Despite signaling the driver to stop, the man continued driving away and soon a chase ensued with police blaring the sirens. The chase ultimately came to an end after officers used a “pit maneuver” to try and stop him. The man was later identified as 32-year-old John Henry James III.

James’ car stopped after it crashed into an unmarked patrol car. However, this did not dissuade the man from continuing his attempt at escape. He proceeded to flee the scene on foot after doing something that left officials in the area astonished. James reportedly hurled his infant at one officer, Deputy Jacob Curby, who thankfully caught the child. Understandably, Curby was left in disbelief after the man just threw his baby at him without any signs of regret. He said, “I’ve seen some crazy stuff but this is definitely up there. It wasn’t a nice underhand handoff from a foot away, it was a throw.”

Detailing the chase and the subsequent throwing of the baby, Curby continued, “It was kind of awkward. I couldn’t chase him, I couldn’t tackle him, not a whole lot I can do because he had the baby. He just turned around, no regard, not a little toss or anything, he just turned around, overhand threw this two-month-old at me from about 6 feet away.” The child luckily did not suffer any injuries after being tossed in the air. “He’s just a cute little baby, fluffy hair, had a cute little outfit on. Luckily we were able to get the baby from him before he did trip and fall, or try to carjack somebody else,” added Curby.

The sheriff’s office shared the edited dashcam video of the chase and the struggle that followed when deputy officers were trying to cuff him. Footage shows James dodging roadblocks, before running over some “stop sticks.” He did not have any regard for pedestrians as he sped near them, prompting deputies to turn off their sirens and back off. “There’s people everywhere on the street down here,” a deputy was heard saying the video. Officers in a helicopter continue to track him from above until police cars block the entrance to an apartment complex that James allegedly tried to enter.

Next, he took off on foot with the baby in his arms, before tossing it towards the officers. Finally, when officers attempted to detain James, he continued struggling and resisting. He was also taken to a hospital after complaining about not being able to breathe. That being said, police revealed that he was resisting even as he was being put on a stretcher. Sheriff Eric Flowers condemned James’ actions and said, “You can’t throw a baby at us and expect us to treat you with kid gloves.”

Following the incident, the man was apprehended and charged with several counts of reckless driving, resisting arrest with violence, aggravated child abuse, aggravated battery on an officer, fleeing, and eluding. James has been booked into the County Jail without bond.