“Hero” police officer gets hit by a car before pushing student out of harm’s way: “Selfless response” 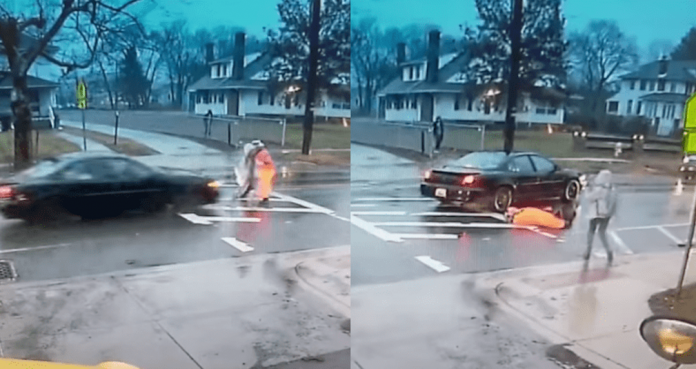 A brave police officer put herself in harm’s way to protect a young student from an oncoming car. The dramatic display of courage unfolded on Friday when the officer was helping children cross the street to get to school. That’s when a car came speeding towards the crosswalk even as the child was walking across the road.

Cpl. Annette Goodyear from Maryland, who was wearing an orange safety vest, signaled the incoming traffic to stop by raising her hand when she saw the child cross the street. But moments later she realizes that a car speeding in their direction. The footage from the heart-stopping incident shows the veteran officer quickly reaching out for the student and pushing her out of way just in time.

In doing so, she takes the kid’s place and is instead hit by the vehicle which failed to stop in time. “Everything just happened so quickly. It just didn’t seem real,” Goodyear said. The officer was unable to get up right after the hit but even at that moment, her top priority was to make sure the student was okay. “I just remember laying on the ground and looking up, and the first thing I thought was ‘where is the student?'” she recalled.

Even though the student had no physical injuries, she “was panicking” having witnessed the shocking incident. “I felt horrible because I couldn’t just jump up and grab a hold of her and say, ‘everything is okay,'” she shared. Goodyear. who suffered minor injuries, was transported to a local hospital and released a day later. Her colleagues couldn’t have been more proud of her quick thinking. Even Maryland’s governor hailed her as a hero.

“We’re just extremely proud of her actions. It was a split-second reaction that saved a child from potential injury. A job well done,” noted  Cpl. John Fakner, according to reports. “​​I will be awarding a governor’s citation to Annette Goodyear for her incredible heroism in putting herself at risk to save a young student from being hit by an oncoming car,” announced Governor Larry Hogan.

Mayor Michael Kline also plans on honoring the officer for her brave deeds, per County executive Danielle Hornberger. “It was an amazing act of heroism. It’s breathtaking; it’s amazing, and we’re just so proud to have Corporal Goodyear in our community.” A statement released by the County Public Schools read, “We are forever grateful for the selfless response of this hero.”

When asked about her actions, Goodyear said that thinking on her feet came naturally to her as she was a mother of three. “This is a kid, and I’m an adult. No matter what happens, you got to protect that child and make sure that child is safe,” she shared. “That was the only thing that was going through my mind. If I have to take the brunt of it, that’s what’s going to happen.”

Once Goodyear was released from the hospital, she made it a point to personally visit the student at her home and check up on her. “She came down the stairs, saw me standing there and as she was walking toward the door she was getting teary-eyed,” she recalled according to reports. “Then her dad started getting teary-eyed, and we all started at that point. I was just so thankful she was standing there and that she was okay.”

As for the driver that hit the officer, they were issued four traffic citations. “They were for negligent driving, driving on an expired registration plate, failing to stop at a pedestrian in a crosswalk, and failing to stop at a yield sign before entering a crosswalk when required to do so,” said the Sheriff’s Office spokesperson, according to reports.