“I lost all blood flow in my legs and they went black”, Father had both of his legs amputated after his condition reacted to COVID-19 and his body began to shutdown 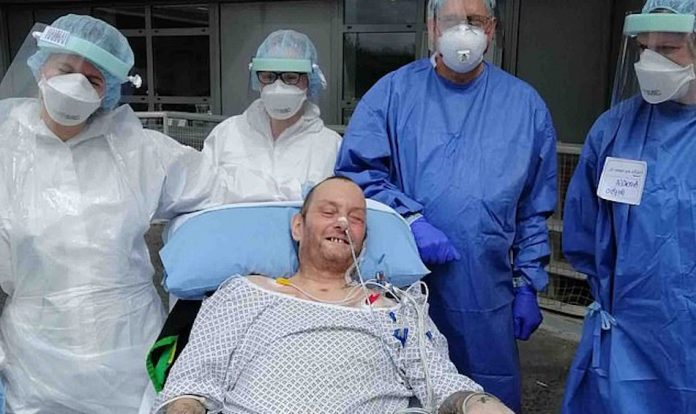 Unfortunately, the 50-year-old father had both of his legs amputated after testing positive for COVID-19. The man spent 16 weeks at the hospital after a diabetes reaction to COVID-19 left the medical personnel fighting to save his life. Doctors and nurses worked tirelessly to save his life after his condition reacted to the Coronavirus and his body began to shutdown. The dad of six says he now suffers from PTSD and still has nightmares about the procedure.

In March 2020, the 50-year-old man, Scott Green, was rushed to the hospital after falling ill.

Green told the Daily Mail that he spent 16 weeks at the hospital after a diabetes reaction to COVID-19 left the medical personnel fighting to save his life.

The 50-year-old father said that the last thing he remembered was being rushed to the hospital. He woke up two months later.

The 50-year-old man, Scott Green, reportedly said: “I can’t remember what happened after that, I had no memory at all. My wife tells me we got to the hospital in a taxi.

The next thing I know I’m waking up a month later out of intensive care, taking a tube out of my mouth, and they ended up telling me I’d lost my legs to Covid.

I didn’t know I had Covid. It reacted with my diabetes and shut the pulses down in my legs, so I lost all blood flow in my legs and they went black. It was either take them off, or I died.”

The father of six told the Daily Mail that it has taken him the two years since the amputation to pick up the courage to speak out about his traumatic ordeal.

The 50-year-old man, Scott Green, also said: “I have a nightmare about 3 or 4 times a week and it’s me sitting there with my head in my hands telling me that I’m losing my legs.

I don’t know if it was from the day they told me, or if it’s just something in my head. Last year I was still fighting. I’ve been suffering from PTSD, and I am also suffering from depression as I lost my son to cancer when he was 17.”

The 50-year-old father now uses an electric wheelchair and drives an adapted car which is controlled solely through the use of his hands.

Scott Green said: “Now I really am trying to look after my diabetes. I’m trying to control it a lot better, I’m doing lots of different types of exercise. I know I’m doing better than I was. I lost a lot of weight when I was in the hospital.

I was talking to a woman from a charity for about 12 weeks. I got it all out – and I can tell people a lot more about what’s happened now.  I’m more confident about talking to people and I don’t really care about what people think I look like. I don’t care if people look at me anymore.”

The 50-year-old dad says that his wife Lisa was by his side throughout the ordeal.

“You always hear stories about people who have died. I thought – I had Covid and I beat it. Ok, I lost my legs, but I still beat it.” Green said.