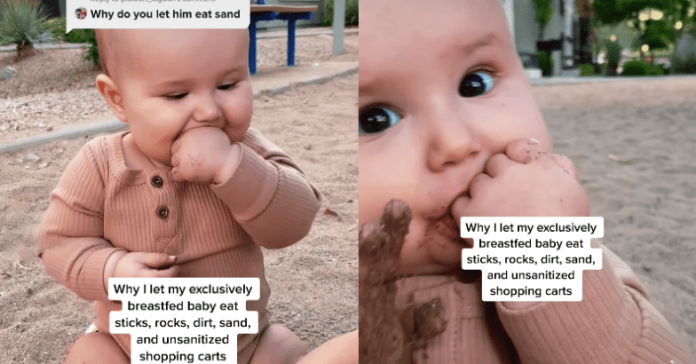 Ladies and gentlemen, when it comes to her baby’s nutrition, this mom includes sticks, sand, and rocks on the menu. And if she finds her toddler licking a shopping cart that’s covered in germs, she would give her son an “Attaboy” type of reaction. This mom’s unusual parenting techniques have made her viral on the internet. Going by the name comingupfern on social media, the young mother describes herself as a “vegan,” “gentle parent,” and “wild woman” on Instagram. She also explained to her thousands of followers that she lets her one-year-old son put anything in his mouth and lick anything he wants so that he builds a strong immunity.

“Why I let my exclusively breastfed baby eat sticks, rock, sand, dirt, and unsanitized shopping carts,” she said. “In the last couple hundred years, the allopathic industry has taken the world by storm. This did not happen by accident. It happened after a series of billion-dollar campaigns intended to shift the public’s perception on health.”

With every handful of dirt and every unsanitized surface that her son licks, the mother believes that her baby boy will be getting an extra immunity boost that will keep him from falling sick as often as other kids.

“I do not fear bacteria,” she added. “In fact, I welcome it. I trust nature and my baby. It is not a coincidence babies have this instinct while they are breastfeeding.”

After her video caused a stir on the internet, the mother received all kinds of comments and many even slammed her for her choices.

“I let my baby play with knives and screws, cause I trust my baby… WHAT,” one person’s comment was quoted. “Maybe the soil is contaminated, or people and animals might have pissed or spit there, parasites, poisonous plants.. A crazy idea: kids should play outdoors, but maybe not put everything they find in their mouths.”

Another said, “I think we’re all aware of natural immunity, kids need to get dirty and whatnot. I probably wouldn’t let my kid EAT dirt and rocks and wood. But I’m also not gonna make them sanitize their hands after touching every surface. Somewhere in between is a happy medium. But shopping carts? I dunno that doesn’t fit the narrative to me.”

Despite the widespread criticism, comingupfern continues to enjoy social media fame as she has nearly 600K followers on TikTok and 25,700 followers on Instagram.

She uploaded her viral video, “Why I Let My Exclusively Breastfed Baby Eat Sticks, Rocks, Dirt, Sand, and Shopping Carts” on YouTube after it was deleted on TikTok.

“My most viral video was removed from TikTok after almost 17 million views, so here it is on YouTube!” she said.

On YouTube as well, comingupfern saw people have opposing views.

“You are a danger to your own child,” said one viewer while another said, “Child protection services need to get involved asap.”

Others agreed with the mother’s idea and said they also have better immunity than others because they were exposed to germs during their childhood.

“I was raised on a farm and was exposed to many bacteria etc etc.,” one said. “As a child I was very rarely sick & now as an adult my immune system is very strong!”