“It was scary”: Kindergarten teacher saves 5-year-old girl choking in the school cafeteria 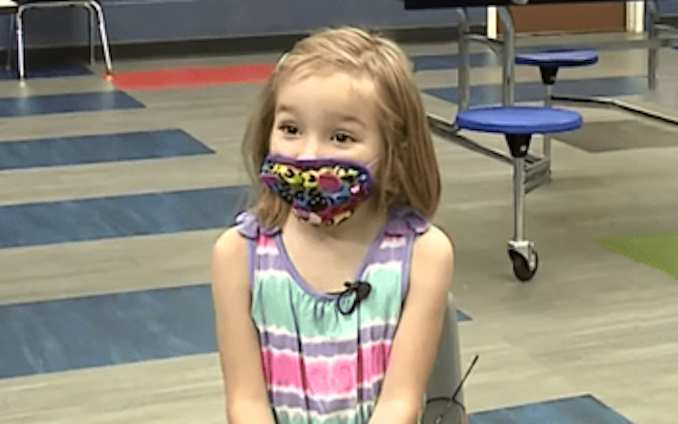 For a teacher and a 5-year-old student, everything came to a standstill at a school cafeteria when the little girl began choking during lunch. Thankfully, the teacher saw what was going on and quickly rushed to save the child. This unfortunate incident occurred when the 5-year-old girl, Fallen, was having lunch. Meanwhile, her teacher, Chene, was keeping a watch over her class of 26 kindergarten students. When Fallen began struggling, Chene immediately noticed and realized that the girl was choking.

“I looked at her, her lips started turning blue and that’s when I knew she was choking,” Chene said

Young Fallen still remembers those distressing moments and said, “It was hard to breathe.” The kindergarten teacher at Pleasant Ridge Elementary in Indiana wasted no time and made sure that Fallen was out of immediate danger. “She started helping me,” Fallen recalled. “She gave me the Heimlich maneuver.”

Moments later, Fallen was taken to the nurse’s office, and it was soon clear that she would be fine, thanks to Chene’s prompt action. Although Fallen was no longer in any danger, her parents still felt a jolt of panic when the school called them up to inform them about what happened to their little girl.

“My heart just dropped to my stomach and it just scared me but I was glad to hear she was OK, they were quick enough to relay that to me,” said Fallen’s father, Dustin Coleman.

Both Dustin and his wife, Shawna, are grateful to Chene for coming to their daughter’s aid. So they decided to visit the elementary school just so they could thank the kindergarten teacher in person.

Following the incident, Chene is happy that she could help a child on what was only her third day of work at Pleasant Ridge Elementary. Before she began working at the school, Chene was employed as an emergency room technician. She is glad that the skills she picked up from her previous job came in handy while she was on lunch duty at the school’s cafeteria.

“It was scary but I’m glad my training served me well,” Chene said. “It also served her well.”

Receiving praises for her efforts, Chene was lauded by the Greater Clark County Schools and was also recognized at a school board meeting for staying calm throughout the situation. “While assisting the Kindergarten class, she observed a student move toward a garbage can,” wrote Greater Clark County Schools in a Facebook post. “She first thought the student was going to get sick, but then she noticed the student’s arms moving in a panic state. Mrs. Hunt immediately went to the student and noticed the student’s lips starting to turn blue. She performed the Heimlich Maneuver, which successfully cleared the child’s airway.”