“It’ll work itself out since he moving soon”, Black family says a young white boy pounded on their door with a whip looking for their 9 year old daughter, then put a big scratch on their vehicle 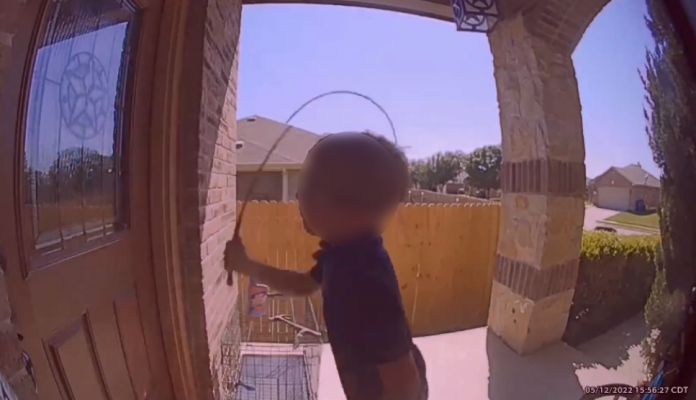 Black mother claims the young white boy was caught on video pounding on their door with a whip looking for their 9 year old daughter. The boy, who was not identified due to his age, then puts a big scratch on the family’s vehicle. When her husband got home, they both went to talk to to the boy’s father about the damages done to their vehicle. The dad reportedly told them that his son is not home. Just few minutes later, the boy’s father comes to the door with a gun, the woman said.

This incident occurred on Friday. The couple from Texas, Dee and Carissa Nash, shared the video on their social media account. The video reportedly shows the unidentified boy cracking a whip on their door while trying to find their 9 year-old daughter.

The video then shows the mother, Carissa Nash, answering the door. The mother reportedly said that the young white boy was upset with and planned to attack her daughter.

It remains unclear why the white boy was searching for Carissa’s 9-year-old daughter and what he planned to do to the little girl if he did manage to find her, TMZ reports.

Just few seconds later, the unidentified boy ran away. Carissa reportedly said that the boy scratched their vehicle while walking away.

“This kid comes to my door with a whip looking for my 9 year old daughter, then puts a big scratch on our Audi. The police came out and tells us, “it’ll work itself out since he moving soon.” So when my husband got home, we went to talk to him about the damages done to our vehicle….The dad tells the son to say he’s not there. A couple minutes later he finally comes to the door with a gun! He almost shot himself and his daughter standing behind him.”

The Sheriff’s Office released a statement and said that the boy’s father, later identified as Bryan Brunson, fired a gun during a subsequent confrontation.

When Carissa’s husband, Dee, got back from work, he reportedly went to the residence of the young boy, to speak to the boy’s father. Brunson reportedly seemed unconvinced that the encounter actually took place, despite Dee’s assertions that the family had caught the incident on video.

Per reports, the boy’s then father produced a firearm and handled it in a reckless manner, causing it to go off.

The Sheriff’s Office said that the bullet narrowly missed his daughter, who they say was standing behind her father during the encounter.

The 39-year-old man was taken into custody and booked on felony charges of deadly conduct.

The 9-year-old boy is a year too young to face any criminal charges, per reports.