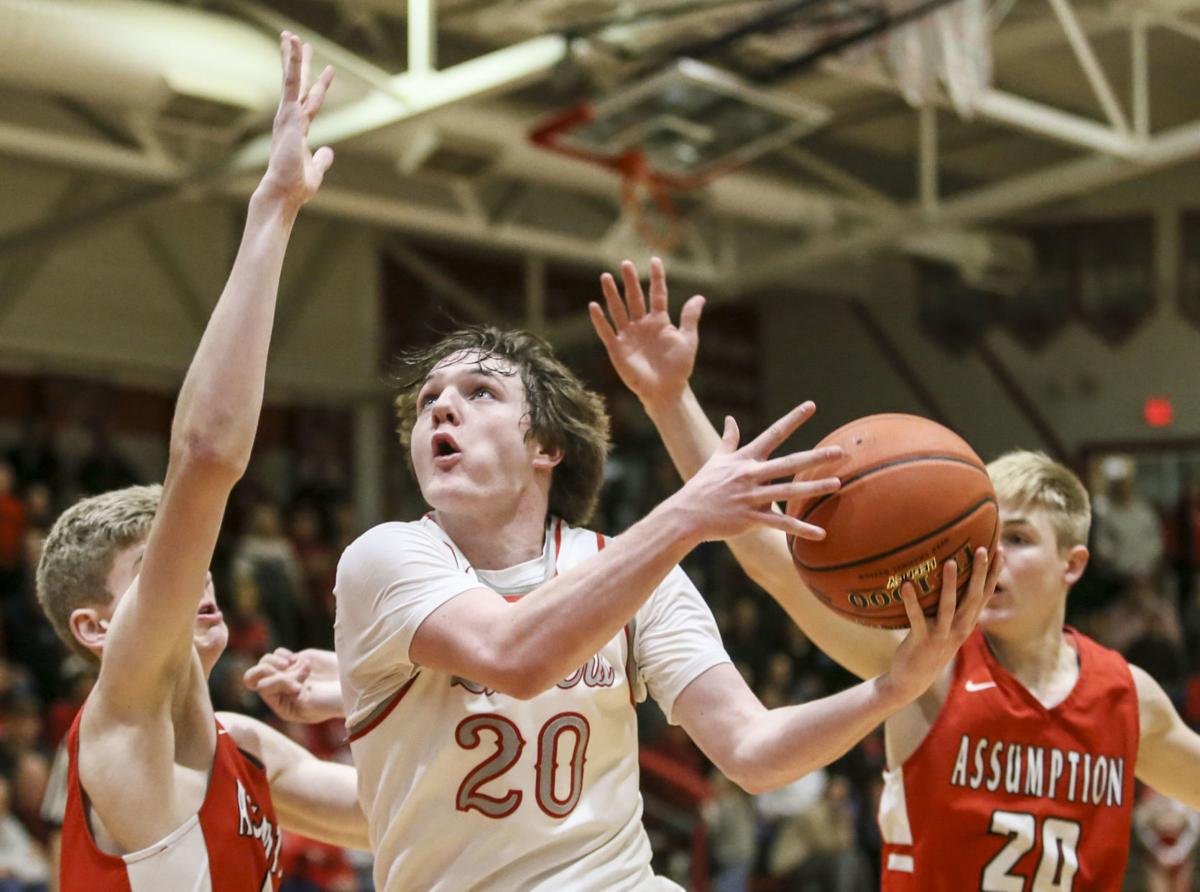 DAVENPORT – There is no shortage of firepower in the gym for Davenport Assumption High School’s boys basketball team this winter.

It has a long and athletic combo guard headed to play basketball in the Big 12 Conference next fall. It has a 6-foot-7 and 260-pound nimble post who has attracted nearly 40 Division I football offers. It has athleticism and multiple shooters on the perimeter. It has depth off the bench.

“This is the most talented team I’ve had here, but time will tell if this will be the best team we’ve had,” said coach Matt Fitzpatrick, entering his sixth season. “I think we’ve got four or five guys who can get us 20 (points) on any given night, and I think you’ll see that happen.

“Our biggest challenge to reaching our potential is everyone understanding we’ve got quite a few guys who can do things and being willing to sacrifice things at times for the betterment of the team.”

It has reloaded in a big way and been deemed the Mississippi Athletic Conference preseason favorite by the coaches.

“The reason I came here was to better myself school-wise and sports-wise,” Ellis said. “I’m not throwing shade to anybody, but that’s just how I felt.”

Ellis’ legal guardian, Travis Thomas, initiated a conversation with Fitzpatrick and Assumption principal Bridget Murphy about the possibility of Ellis coming to Assumption last March before the pandemic hit.

“Travis had seen the growth his two girls had at Assumption and wanted that for Emarion,” Fitzpatrick said. “When we sat down, I was like, ‘Why are you wanting to do this? What is the angle here?’ Ultimately, Travis wanted an opportunity for Emarion to grow academically, socially and athletically.”

Ellis admitted he’s received backlash for his decision. He averaged 17.8 points, 7.8 rebounds and 2.5 assists per game last winter in earning all-conference and all-state honors for the Blue Devils.

“Whatever people have to say, it has nothing to do with my path,” Ellis said. “This is my journey.”

Ellis said the structured system at Assumption has been beneficial for him, especially less than a year before moving to Austin, Texas, and trying to make it at a high-profile program.

“First and foremost, Emarion is a really good kid, really respectful and fits in really well with our team,” Fitzpatrick said. “We’re just working on the everyday habits of academics, weightlifting, skill development and the grind of it all. He’s had moments where it has been difficult, but he keeps getting better and better. I’m really proud of his growth.”

That consistency carries over to the court. That, he admits, is the next step in his basketball development.

During the past two seasons, Ellis has had moments where he’ll reel off a dozen points in a couple of minutes and make jaw-dropping plays. Then, he’ll have stretches where he goes largely unnoticed or is in foul trouble.

“I want to be consistent, and that’s my main goal,” Ellis said. “It is something I’ve been working on.”

Even with limited offseason team work because of the pandemic, Ellis has left a favorable impression on his teammates.

“He brings another ballhandler and playmaker, someone who can dissect the defense and open up teammates. He’s going to be a fun person to watch and fun person to play with for sure this year.”

It bodes well for those around him.

Hodge buried 46 shots from beyond the arc and Noah Mack converted 20 in the second half of the season. J.J. Stratman, Matt Tallman and Finn Oppenheimer also are capable outside threats.

Defenses will have to pick their poison against the Knights.

“(Emarion) is unguardable, a great first step and can get around anyone,” Mack said. “We really didn’t have that guy who could break into the defense and kick out for a 3 last year. Having that this year, it will definitely allow us open shots and let us get in the flow of the game.”

Assumption has girth inside with senior Tyler Maro, a prized football recruit who can clog the middle and be a force on the glass. Fellow senior Owen Hamel, coming off an all-state football season, is expected to provide depth inside.

“We’re versatile, pretty deep and we have a lot of basketball players,” Hodge said, “and our chemistry is getting there. It is getting better each and every day.

“If one team takes away one dude, another dude is going to come on. The fact anybody on the floor can have a big night is something nice and special to have.”

The Knights hope it can translate into something special come late February.

Assumption has won 14, 14, 15 and 19 games, respectively, each of the past four seasons. The biggest obstacle has been getting over the substate final threshold, losing to Marion, West Delaware and Clear Creek Amana in the Round of 16 over the past three years.

“Oftentimes in high school basketball, we let one game dictate how you think your season went,” Fitzpatrick said. “We’ve had a bad taste in our mouths from that game, and sometimes we put too much into that.

“This year, the focus really has been, ‘Let’s just keep getting better.’ When the time comes, we want to make sure we’re prepared for the moment.”

Assumption has all the ingredients to make an extended postseason run. The task for the next three months is blending them together.

“We definitely have the talent in the gym,” Mack said. “Now the key is to bring it every day in practice and push ourselves to be the best that we can be this year.”