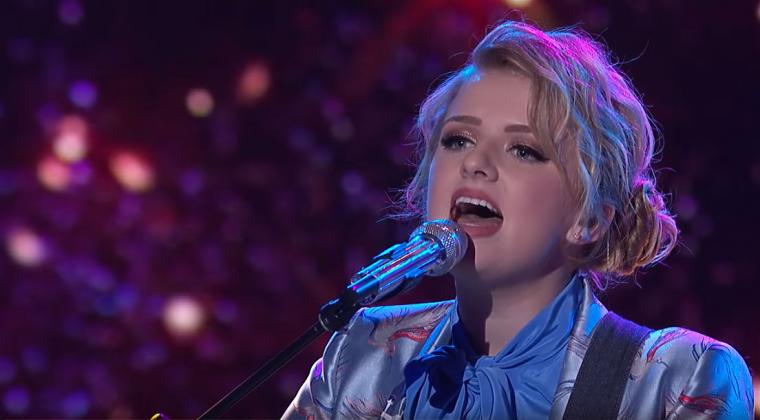 DAVENPORT – An American Idol champion and Iowa native returns to her home state on December 19 in Maddie Poppe’s Acoustic Christmas, a festive holiday concert featuring seasonal tunes and songs from the artist’s albums Songs from the Basement and Whirlwind, the latter described by Guitar Girl magazine as boasting “unforgettable melodies and cultivated songcraft.”

A naive of Clarksville, Iowa, the 23-year-old singer/songwriter/guitarist Poppe had her first brush with fame opening for Diamond Rio at the 2016 Butler County Fair right after high-school graduation, and that June, she released her first album Songs from the Basement. The following summer in New York, Poppe auditioned for season 16 of American Idol, where she sang “Rainbow Connection” from The Muppet Movie. Judge Lionel Richie consequently hold the artist that she had a “storytelling voice” and that “we need you in this show,” while Katy Perry said she had a “distinctive quality in your voice” and Luke Bryan said “I’m not critiquing you, ’cause you got me – I’m saying yes.” During the May 20 finale, she performed Fleetwood Mac’s “Landslide” as a way to honor her hometown, her original song “Don’t Ever Let Your Children Grow Up”” as a reprise, and her winners’ single “Going Going Gone.” On the results show broadcast on May 21, she was declared the winner with Caleb Lee Hutchinson the runner-up; during the finale, Hutchinson announced that he and Poppe were also dating.

Since her American Idol victory, Poppe has appeared on multiple television shows including Jimmy Kimmel Live, Live! with Kelly & Ryan, and the 2018 Radio Disney Music Awards, and has performed at the Hollywood Bowl in Los Angeles, the Special Olympics, and the CMA Fest in Nashville. Released in May of 2019, Poppe’s sophomore album Whirlwind reached number two on the iTunes Pop charts, and her hit single “Made You Miss” landed in the Top 20 on the Hot AC Radio charts. Reviewing the album, Guitar Gal raved that Poppe “pours her emotions into lyrical ideas that are then neatly wrapped in elements of Americana, indie-rock, and pop,” and went on to praise the singer/songwriter’s “radiant voice, straightforward storytelling, [and] heart-on-sleeve presence sure to captivate audiences around the country.”