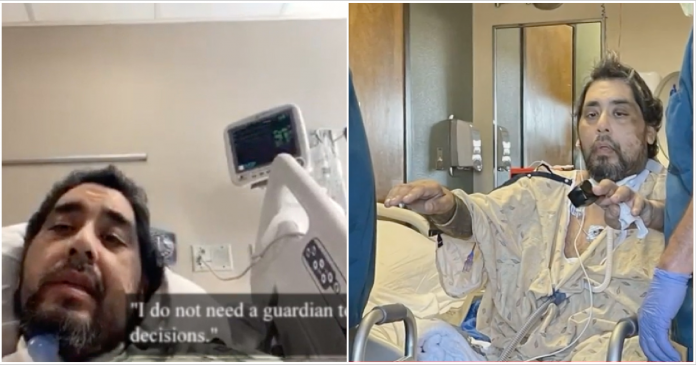 According to reports, the man has been hospitalized for about 10 months due to COVID-19 complications. But now, he faces another major problem. He is in the middle of an ongoing legal fight for his rights to make decisions on his behalf.

According to reports, the man from Texas, Mark Miranda, was barely able to speak six months ago. The father of two was making slow progress on a ventilator. The good news is that today he’s talking and moving on his own.

But, he has a major problem ahead of him. He is in the middle of an ongoing legal fight for his rights to make decisions on his behalf.

According to reports, in September, the CSRHS (Christus Santa Rosa Health System) served the Miranda family papers, asking that Mark be stripped of rights to make his own decisions and forfeit them to a group called Angel Guardians LLC.

The family appealed in court and it was determined that Mark would not be appointed a guardian.

Mark Miranda reportedly said: “I do not need a guardian to make my decisions.”

Unfortunately, in October, the court appointed him a temporary guardian. Right now, the man from Texas is no longer at the CSRHS, but in another hospital recovering from pneumonia.

According to reports, one week ago, the family was served papers requesting permanent guardianship from CSRHS, stating Mark is incapacitated.

Attorney Erica Maloney reportedly said: “If he’s able to demonstrate that he is of sound mind, capable of making decisions, has a sense of awareness, then it would be completely inappropriate for a guardianship to be appointed.”

According to reports, CSRHS were reportedly asked why they wanted to pursue permanent guardianship since the man is no longer a patient there.

They reportedly released the following statement:

“Any decision that is made about the care of our patients is carefully made and only in the best interest of our patients. This is an ongoing legal matter and we can’t speak about specifics.”

Mark’s wife is warning others that this could happen to them as well. She reportedly said:

“If you’re going into the hospital, make sure you make your wishes known, tell somebody what you want to have done with you. If not, things like this can happen to you.”